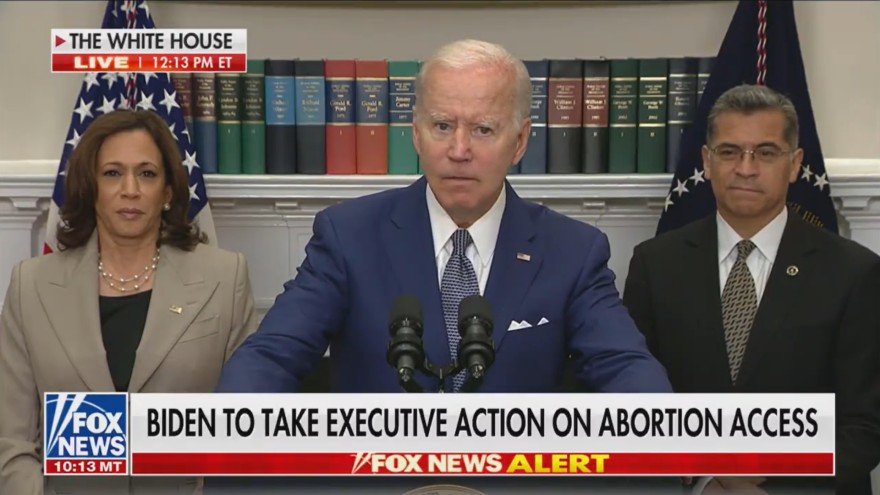 The viral story, repeated this week in a speech by Joe Biden, that a 10-year-old rape victim was forced to travel across state lines to get an abortion after being raped, has come into question after a Washington Post fact-checker found the story to be largely unfounded.

The one-source story was provided to an Indiana news outlet by Indianapolis obstetrician-gynecologist Dr. Caitlin Bernard last week, a doctor who is an outspoken pro-abortion activist.

The story states that the child was raped and had to seek an abortion in Indiana after her home state of Ohio banned abortion.

On Friday, Biden referenced the story in his speech about the executive order he signed related to abortion access and medication abortion.

“This isn’t some imagined horror; it is already happening. Just last week, it was reported that a 10-year-old girl was a rape victim – 10 years old – and she was forced to have to travel out of state to Indiana to seek to terminate the pregnancy and maybe save her life,” Biden said

In calling out the extremism of many red state #AntiAbortion laws, President Biden recounted the story of a 10-year-old rape victim forced to cross state lines in order to receive reproductive care@nowthisnews pic.twitter.com/YcE5z2RX75

The story was shared in the Indianapolis Star on July 1, but is now being questioned for its authenticity.

New #FactChecker —-> A one-source story about a 10-year-old and an abortion goes viral https://t.co/mzaIarvCKw

“This is the account of a one-source story that quickly went viral around the world — and into the talking points of the president,” Kessler said.

Kessler noted how Bernard was the only source for the story. He revealed Bernard declined to provide details to the Post about the location of the alleged rape, or whether authorities were investigating it.

“The only source cited for the anecdote was Bernard. She’s on the record, but there is no indication that the newspaper made other attempts to confirm her account,” Kessler added.

Kessler noted that after the story went viral, there was still no further authentication of facts or other sources for the story.

“News organizations increasingly ‘aggregate’ – or repackage – reporting from elsewhere if it appears of interest to readers,” he said. But noted that “Bernard remained the only source.”

Shari Rudavksy, who originally wrote the story, “did not respond” to Kessler or anyone for further verification.

The paper’s executive editor, Bo Krift, defended the piece but said, “We have no additional comment at this time.”

Bernard declined to identify her colleague’s name or the city where the rape transpired. Bernard wrote in an email: “Thank you for reaching out. I’m sorry, but I don’t have any information to share.”

One of the most important facts related to the story is the legal obligation of those involved. Physicians and reporters must disclose child abuse evidence to the police by law. Yet, in the days since, no arrests in such a case have been reported.

Dr. Caitlin Bernard, who made this claim, is a mandated reporter of child abuse. When did she report the rape of a 10 year old? Where is the police report? If it doesn’t exist, she’s either a liar or she needs to be arrested for not reporting a child rape.

— Reclaiming My Everything (@WhyIsKorisTaken) July 8, 2022

The Ohio Governor’s office said this week that it was “unaware of any specific case’ that met the claims” criteria.

Kessler concluded his report that the case would be impossible to substantiate until more information is provided.

The White House has refused to offer proof to support President Biden’s claim that a 10-year-old rape victim was denied an abortion in Ohio and had to travel to Indiana for the procedure. https://t.co/ahaBRlQS7m

“This is a very difficult story to check,” Kessler wrote. “Bernard is on the record, but obtaining documents or other confirmation is all but impossible without details that would identify the locality where the rape occurred.”

He added that people should take Bernard’s claims with a grain of salt in the absence of the charge.

Folks have asked many questions, and possibly the most concerning is why have the pro-abortion crowds become so focused on this little girl’s access to abortion over seeking justice for a supposed rape victim.

It appears the story was fabricated to push the pro-abortion agenda.

The post Biden’s Claim Of 10-Year-Old Who Had To Cross State Lines For Abortion Is Called Into Question By Fact-Checkers appeared first on The Gateway Pundit.