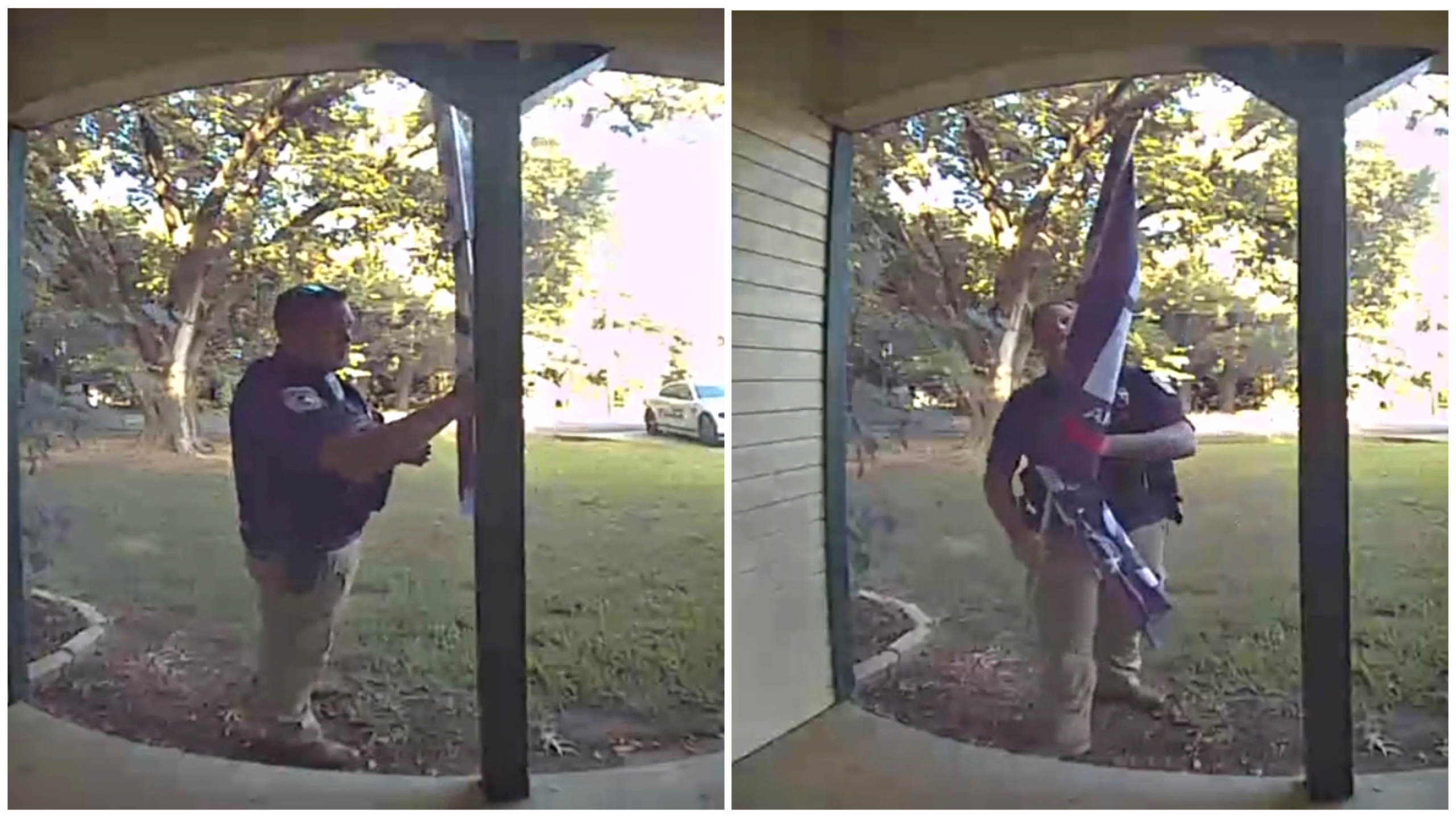 A video of a Pottsboro police officer removing a “F-ck Joe Biden” flag from a man’s property while they were away has gone viral.

Michael Prather, a resident of Pottsboro, Texas, has uploaded a video of the incident on his Tiktok account, in which the officer can be seen pulling the FJB’s flag down.

“Pottsboro, TX PD coming to my house [to] take my flag down while my family and I are gone,” Mr. Prather wrote on his TikTok. “I’m tired of this! Pottsboro PD only wants to do things to a few but not to others. I need help!!”

Mr. Prather addressed the situation on his TikTok through a series of videos, claiming that the mayor of Pottsboro as well as other neighbors have made a complaint about the flag.

“I have PTSD, I have depression and everything. So he [Pottsboro mayor] has to drop by my house every day to get to the city hall. And my source is saying that he is a registered Republican, but in all reality, he’s a liberal. Just like the other person that is just north of him is a liberal.” Prather said.

“And my recent source is saying that there’s a complaint. They’re crying about it [and] they don’t like it. I say f*ck them. You don’t like it? Kiss my as*,” Prather added.

In another video, Prather shared that he had been approached once before by the same officer in the video to take the flag down because of profanity. “Yes, it says, F*ck Joe Biden and f*ck you for voting for them. So, yes, I guess you can say that it’s a pro-Trump flag. But I have been approached once before — it was back in October… I actually put that flag up that evening, and it wasn’t even 72 hours later, Monday morning, that officer you saw in the video taking the flag down, came to our house and approached me,” Prather narrated.

According to Prather, he told the police that it was his First Amendment right to fly a flag, but the officer threatened to prosecute him with disorderly conduct.

“And the conversation was like, the Chief of Police asked me to come by to take the flag down or request you to take the flag down because of profanity. And I explained to him that it was my First Amendment right, that I could fly the flag. It’s freedom of speech. But he also threatened me with a disorder conduct charge, which in Texas, disorder conduct is a class C misdemeanor,” Prather explained.

Mr. Prather revealed that he’s been looking to get an attorney and has called nine offices, but neither one of them seemed interested in taking this case.

He is pleading for assistance in the event that they choose to pursue any form of legal action.

“I’m not begging for any money or anything, but also I’m not really broke. We’re not really broke… But we are not financially stable to actually hire an attorney because most attorneys want money upfront and money upfront is what we don’t f*cking have. But I’m willing to like I said in the last video, willing to talk to the police if they actually come to my door,” he said.