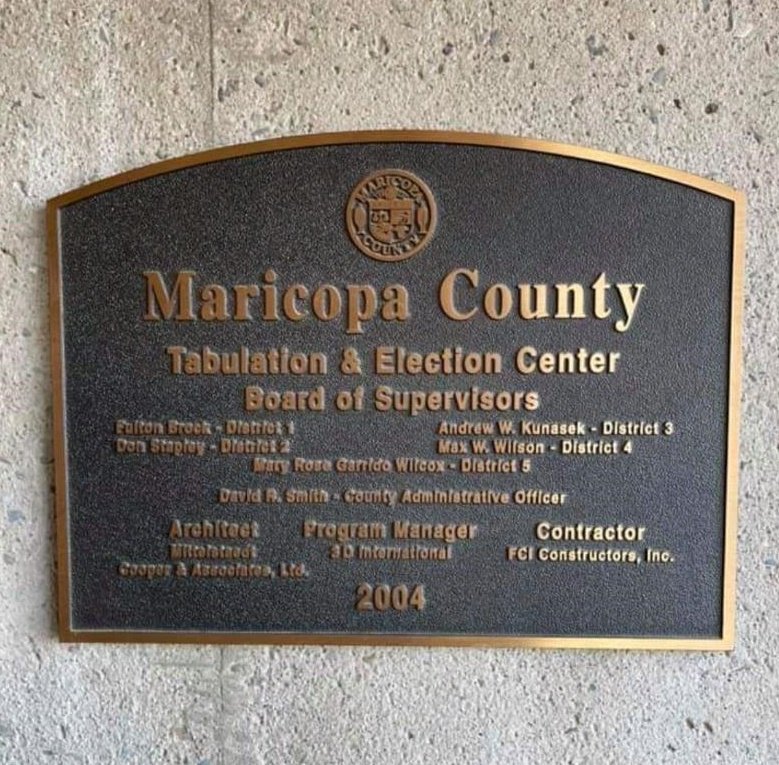 The Arizona Attorney General’s office has responded to voter concerns about 2022 Primary ballot envelopes clearly showing party affiliation, which appears to be illegal.

In an email responding to an anonymous Maricopa County voter on Tuesday, Assistant Attorney General Jennifer Wright said, “Based on the EIU’s review of allegations, the EIU was unable to substantiate a violation of Arizona election law.”

The Arizona Attorney General’s office already failed Arizona by not getting to the bottom of the Fraudulent 2020 Election and just letting them get away with it. It appears they will do it again, and allow all of the same law violations to take place.

Early voting started on July 6th, and more than 279,000 ballots have already been processed. The Primary is on August 2nd. SB1002, signed into law by the Governor on March 18, 2021, updated Arizona Revised Statutes to read, “The officer charged by law with the duty of preparing ballots at any election shall: Ensure that the ballot return envelopes are of a type that does not reveal the voter’s selections OR POLITICAL PARTY AFFILIATION and that is tamper evident when properly sealed.”

The Gateway Pundit reported on the initial email alerting authorities of this opportunity to commit fraud in the Primary Election.

The envelope that voters use to return their ballot does not as clearly show party affiliation, but this still appears to violate the law and creates concern by identifying Republican voters. The return envelope’s paper can easily be seen through to reveal party affiliation and possibly voter selections with a flashlight.

This primary is being conducted in violation of A.R.S. 16-545
B. The officer charged by law with the duty of preparing ballots at any election shall
2. Ensure that the ballot return envelopes are of a type that does not reveal the voter’s selections or political party affiliation pic.twitter.com/lvkolGfO0h

Assistant Attorney General Jennifer Wright sent the following email response to the concerned citizen noting that the law contains requirements for only ballot return envelopes and not sent envelopes. However, as noted above, the return ballots are see-through!

Regardless, the live ballots clearly reveal voters’ party affiliation and their addresses. This creates a serious election integrity concern for bad actors who seek to abuse Republican ballots.

The Elections Integrity Unit (“EIU”) of the Arizona Attorney General’s Office is in receipt of your email dated Friday, July 8, 2022.  Based on the EIU’s review of allegations, the EIU was unable to substantiate a violation of Arizona election law.

Thank you for your interest in election integrity.

The Maricopa County registered voter submitting this call for an investigation sent the following response with a special hat tip to The Gateway Pundit for shedding light on Arizona’s Election concerns.

“This is pathetic. Although A.R.S. 16-545 B2 states ‘ballot return envelopes,’ we see how those charged with the administration and oversight of the election, both elected and unelected, ignore or exploit the spirit — and far more — of the official protocol on the front end: the live ballot envelope mailed from the Maricopa County Recorder’s Office to registered voters who vote by mail (more on so-called “Vote By Mail” below) openly exposes voters’ political party registration (or party ballot chosen under other circumstances) for all to see through the window on the back of the envelope.

Whatever about this, that, or the other technicalities and rationalizations, it’s an obvious — in-your-face (and in-the-face of everyone else who sees your ballot) — election integrity violation. Here we go, once again. We keep seeing ignorant, arrogant — and, therefore, dangerous — elected and unelected government officials and bureaucrats act as if,

Be it a matter of amorality or immorality among some of these government officials, it’s attitudes like this which are directly responsible for the wide-ranging multitude of ongoing unresolved election integrity controversies we see here in Maricopa County and, more or less, just about each and every jurisdiction throughout the United States. One election integrity violation is one too many. We The People, starting right here in Maricopa County, must take our government back to get it back on track.

Although some Maricopa County government officials may say this sort of thing’s been going on for a long time, as if that makes it alright, it shows too many in Maricopa County and Arizona state government are either missing the point and principle of the matter or they’re more interested in and committed to their the preservation of their own bureaucratic institutions for their own sake than upholding election integrity for We The People’s sake, past, present, and future generations, all.

Although these windows exposing live ballots should be immediately disqualified in this 2022 Primary Election, here’s to seeing the windows removed — for all time — as soon as possible in the future, starting as soon as the 2022 Maricopa County General Election. Let’s go, Arizona State Legislature, Arizona Governor, Arizona Attorney General, Arizona Supreme Court, and others.

Gateway Pundit is to be appreciated for its reporting on this story, amplifying the principle and essence of the matter, something that’s really just a matter of basic common sense. Sadly and tragically, we keep seeing too many of our fellow citizens susceptible to being talked, tricked, or Trump-bashed out of their God-given common sense. We must resolve and work to turn that around. Gateway Pundit is providing an open platform for this important conversation. It’s an ongoing controversy that must be resolved, and it’s good to see the attention and momentum building. Here’s to seeing a real and meaningful breakthrough on the horizon, getting it all locked down, especially revising and upgrading A.R.S. 16-545 accordingly, as soon as possible.

However, ultimately, whatever it takes, and however long it takes, so-called “Vote By Mail” on a mass scale must be terminated, here in Arizona and all throughout the United States. If you really think about, openly, objectively, and logically, “Vote By Mail” is not real voting. It’s an artificial construct. It violates the basic principles of election integrity, the 14th Amendment equal protection clause, and far more.

We must get back to real voting:

We The People throughout the Republic rising on one day, voting on Election Day (getting rid of the so-called “Election Month” that is the 27 days of so-called “Early Voting” here in Maricopa County), and Election Day voting (please stop calling it “Day Of”) must take place in-person, at precinct-based polling places — scaled appropriately for maximum 1) efficiency, 2) performance, 3) transparency, 4) accountability, and 5) auditability — all on paper ballots.

And what’s it going to take for Dominion Voting Systems to be terminated here in Maricopa County once and for all, especially after seeing something so shocking as this open admission by Maricopa County government of it’s error in turning over partial control of the administration of the 2020 election to Dominion?“

Another concern this creates involves “vote buying.” The Arizona GOP recently announced they’re offering a $50,000 reward for information or evidence of “vote buying” in the 2022 Primary Election. Bad actors used this practice to illegally harvest or traffick ballots in the Stolen 2020 Election, and Arizona Republicans do not want to be targeted by these criminals again.

Arizona patriots MUST get out and vote to outnumber the massive fraud.