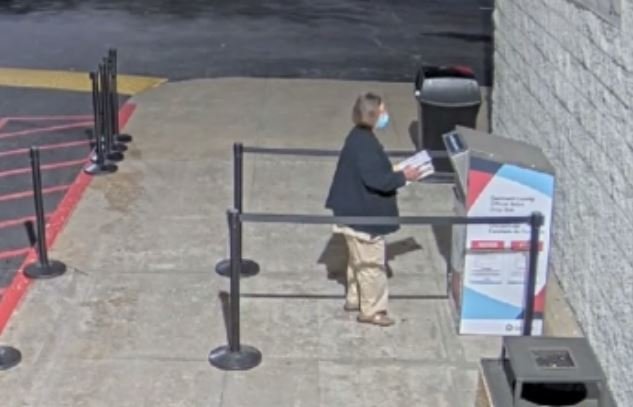 If you haven’t yet seen the incredible documentary by filmmaker Dinesh D’Souza titled 2000Mules yet, you are doing yourself an injustice as an American citizen.  And if you have seen it and haven’t shared it with those who believe “the Big Lie”, you’re doing them an injustice.

The parameters used in the 2000Mules documentary required that a unique ID visited a dropbox at least ten times and a non-governmental organization (NGO) at least once.  The theory is that the NGOs served as a means of supplying ballots to the mules, who then dispersed them throughout a jurisdiction by dropping off quantities throughout the county.

The Gateway Pundit has released several videos of individuals in these swing states allegedly dispersing ballots in key swing states.  But if the “mules” discovered so far on video were comparable to a sought after fish in the sea, this one would be the Goliath Grouper!  The individual pictured below appears to drop at least 30 ballots, perhaps more, in a single trip to a single drop box.

(if you get an “extension” error, give it a second to load)

This woman doesn’t look to be holding a single ballot in a single mail in envelope.  She doesn’t even appear to be holding a “few,” as would be permissible under GA law (dropping off for family/household members is permissible).  She appears to be holding a ‘ream of paper’ sized stack, just like the kind you pick up from your local office supply store with 500+ sheets.  Perhaps she cast a vote for each of her cats, as well as her entire extended family, and her co-workers as well?

I was fortunate enough to interview Catherine Engelbrecht, founder of TrueTheVote, back in June and ask her about some of the “rebuttals” to 2000Mules.  She was more than willing to discuss the arguments made by the naysayers:

In this clip from the Behizy Hub podcast (full interview), Catherine discusses the GBI and their “100ft” perimeter claim in their dox letter.

It is worth mentioning that Gregg Phillips of TrueTheVote has also promised us something “10x’s bigger than the Mules” is coming.  When it is released, rest assured The Gateway Pundit will be covering it!