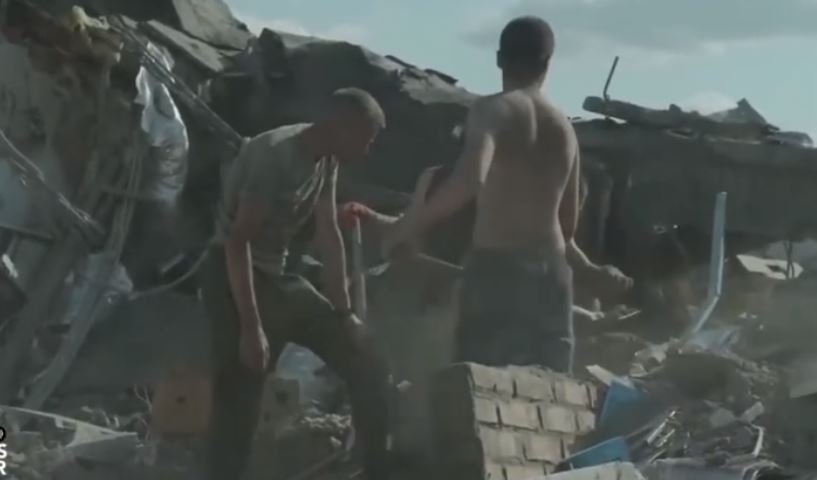 CBS bosses have had second thoughts and decided they did too much journalism. The interview that was posted at CBS two days ago featuring an intrepid reporter who dared to ask the right questions about who was receiving the billions of dollars in weapons that the United States provided to Ukraine has been deleted.

Thank God for Bitchute and Rumble. Once you post some news it can live on. Here is the full report:

This report apparently had been in the works since April. How do I know? Look at the clothing (e.g., coats and sweaters) many are wearing in the portions of the video showing the reporter and his companions trying to deliver weapons to front line Ukrainian troops. It is important to note that the CBS reporter is very supportive of the Ukrainians fighting the Russians. He also interviews a former U.S. Marine who is enthusiastic about killing Russians and not concerned about U.S. weapons going astray.

But this reporter inadvertently provides further video evidence that corroborates the piece I wrote in May–Ukrainian Military Units Continue Rebelling against Their Commanders. After you watch the CBS report you will know why the Ukrainian troops in the videos I posted were rebelling against their incompetent chain of command–they were not getting the weapons they needed to fight.

One troubling question remains–what happened to the weapons siphoned off that were not delivered to the troops at the front? Who has them and who is buying them?

Since May, the situation facing Ukrainian forces in the Donbas has become more dire. The Russians claim they are making progress:

Solidar – KNAUF factory grounds, and, consequently, the eastern part of the town, is taken. Similar actions underway in Bakhmut. Explanation of the Russian tactics near both towns, as well as near Avdeyevka. News on possible reconnaissance by combat by the Russian troops towards Nikolayev – a move is taken very seriously by the Ukrainian planners who prepare for the defense of Nikolayev, anticipating a Russian attack there.

Solidar, Bakhmut and Avdeyevka are heavily fortified. The Ukrainian soldiers hunkered in trenches and bunkers have been pounded mercilessly with artillery, rockets and missiles. The Ukrainian General Staff insists it is holding the line and stopping the Russian advance:

In a briefing, the General Staff of the Ukrainian armed forces said the Russian forces tried to conduct several assaults in Donetsk against multiple settlements near Sloviansk, but the Ukrainian forces pushed them back.

“With offensive actions, the enemy tried to improve its tactical position near Verkhnokamianske, a village in Donetsk region, but was unsuccessful and retreated,” the General Staff said.

The Russians also “conducted offensive and assault actions in the districts of Bakhmut, Zaitseve, Yakovlivka and Vershina but were unsuccessful and retreated,” the General Staff added, saying that fighting continues near Kodema, Krasnohorivka, Avdiivka, Pisky and Mariinka.

The General Staff also reported that Russia is “concentrating its main efforts on preventing the advance of our troops” in the south and shelling “the entire line of contact.”

We will know by Friday who is telling the truth about which force is advancing and which is retreating. But the Russians and Ukrainians agree on one point–Russia is shelling the “entire line of contact.”

The post CBS Goes Full Back Flip and Tries to Erase Reality appeared first on The Gateway Pundit.