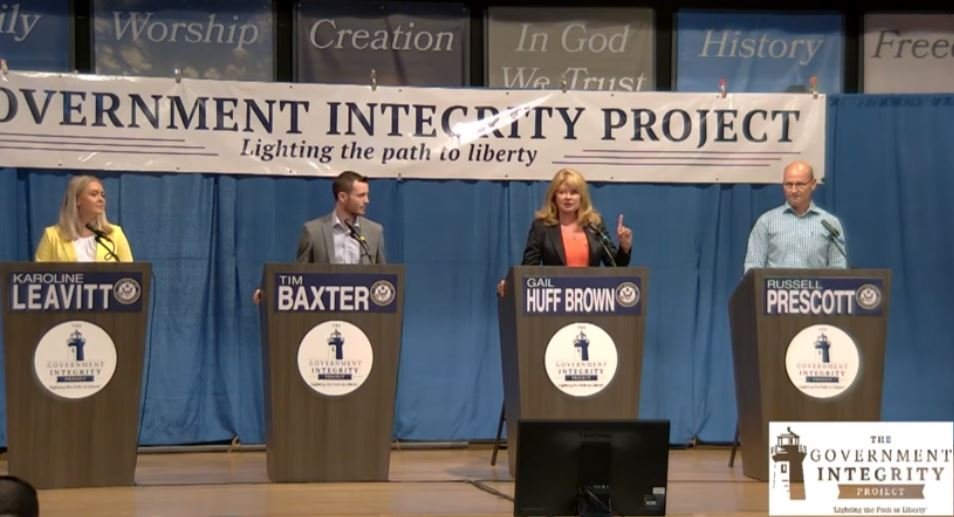 The Thought Police over at YouTube strike again.  This time, they attacked the Government Integrity Project in New Hampshire by issuing their channel a warning and REMOVING a debate for the Congressional 1st District in New Hampshire.

YouTube issued a “warning” and took down the entire debate stating it violated their rule by containing content that “advances false claims that widespread fraud, errors, or glitches changed the outcome of the U.S. 2020 presidential election“.

The debate was hosted by the Government Integrity Project (GIP) and moderated by Heather Mullins of Real America’s Voice.

The GIP also live-streamed the event to their YouTube channel, so that fellow Americans could hear what their candidates for federal office had to say.

Heather Mullins did an incredible job asking questions that most in the mainstream would never bother to ask because they don’t fit the topics they want us focused on.

Among the questions asked that are concerning amongst Americans but avoided in the media:

According to the NH Journal, “typical debate topics like inflation and education also made an appearance. But the audience was most animated when the conversation turned to claims of election fraud and government abuse.”  It is worth nothing that the NHJournal claims GIP is “an organization promoting claims that the outcome of the 2020 election is either in doubt or that it was out-and-out stolen by Joe Biden and the Democrats” but author Michael Graham responded “Good luck.” when I asked him for sources on that claim and the claim in the title of the article.  Instead, I’ll use the organizations mission: “Our overall mission is to unite the country and demand action; to hold elected and appointed representatives accountable to their oaths and obligations of office; to protect and restore Liberties as defined in our Country’s Founding Documents.”

But the live-streamed debate video it’s now deleted.  YouTube’s Draconian mandate that you don’t dare question our election process is unpopular with the US population on both sides of the political spectrum.   Still, the people have not moved on from the 2020 election.  In May, Rasmussen released a poll showing 55% of all voters believe cheating impacted the outcome of the 2020 election.

Imagine how high that could be if the censorship “Overlords” allowed individuals to speak freely and actually have discussions about what happened in 2020!  There is significant evidence that widespread fraud was committed solely utilizing missing chain of custody documents, Open Records documents and mysteriously deleted files.  Please fact check this so I can provide the receipts.

Instead, the fake news Media Matters conglomerate writes a hit piece on myself and other citizen journalist for talking about the Arizona Audit.  The “journalists” at Media Matters even cited a video I live-streamed of General Flynn giving a speech.  It had nothing to do with election fraud.  Gen. Flynn was raising funds for paraplegic veterans to purchase robotic legs.  Their hate and vitriol for anything against their narrative runs so deep they don’t even investigate what they write.

“…Attempting to migrate ‘their’ audience to Rumble.”  How dare Media Matters assumes my gender as “they/their”.  I am “he/him”, thank you very much!  Racists.  Or something like that.

Then, the next day after their hit piece, YouTube mysteriously begins taking all of us down permanently, without warning and without exhausting all of our “strikes”.

Now, the “Overlords” have taken it a step further and they are censoring the speech of a public debate for a federal office in New Hampshire.  You sure this is a good idea in a State who’s motto is “Live Free or Die”??  That sounds like election interference in a federal election.

Where is Congress?  It is long past time that these tech companies were reeled in and put in check.  With the ability to manipulate not only what is allowed to be said, but also what you will actually see, we are far passed the point of mind control and mass manipulation.  This is mass psychosis population control type of dissemination.  They shut down a congressional DEBATE today.

Imagine a world where thousands can be cut off from seeing a public debate for political office because YouTube doesn’t want you to hear about election fraud.  They have done it with vaccines as well, and continue to do so.  The number of deaths from vaccines is unknown but some predict it is in the hundreds of thousands.  Others in the millions.  Our own VAERS system shows 30,162 deaths currently and over 172,000 hospitalizations.  VAERS is said to be underestimated by 99% (yes, you read that right).  On the high end, that would mean there have been over 3,000,000 deaths in the US alone from the vaccine.  Perhaps this is why so many businesses are understaffed and looking for help?

Would you have taken the vaccine if you were allowed to hear opinions other than those of the CDC, FDA, CNN, NY Times, etc?  Would the words of world-renowned cardiologist Dr. Peter McCullough or the inventor of mRNA technology used in the vaccines, Dr Robert Malone influence your decision if they told you why you shouldn’t take the vaccine?  Not on YouTube, they can’t!  Google’s profits soared as a result of the pandemic lock downs and the undivided attention of hundreds of millions of individuals to scroll through their ads.  Of course they didn’t want you back out and about!

The world’s largest online video database and live-streaming site won’t let you talk about what they don’t want you to talk about.  They’re also owned by the largest search engine, Google, which means they could restrict from you seeing what they don’t want you to see as well.  And they profited handsomely off the current administration’s policies.

Are you awake, yet?