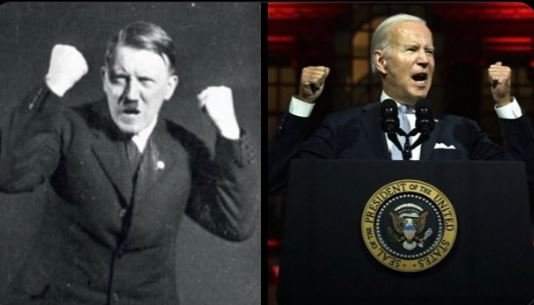 Dave Portnoy is the founder of Barstool Sports a very popular website that contains a mixture of podcasts, blogs, and video series featuring company staff in what has been described as “a sort of online reality show.

From time to time, Portnoy dabbles in current events or politics in his podcasts.

On Thursday night Dave Portnoy did not hold back in his commentary on Joe Biden’s “f*cking Hitler” esque speech.

Dave Portnoy: So I’m minding my own business last night watching college football. And these images, I’m not watching Biden’s speech, I didn’t even know he had a f^cking speech. But all of these images come out. And, my God, the man looks like Nazi Germany with a dash of Cold War Soviet Union with a dash of Dwight Shrute with a dash of Hunger Games. Just like the biggest dictator-looking set ever. Surreal. It’s surreal… If you can’t look at the photos and imagery that came out from Biden last night that without a doubt, it was the worst staging in the history of American politics… This man, our president, looked like f*cking Hitler. I’m not saying he’s Hitler. I didn’t even listen to a lot of his speech. He looked like a f*cking charicature. He looked like Hitler…

Via Catturd and Il Donaldo Trumpo.

The post Barstool Sports Founder Dave Portnoy: “Our President Looked Like F**king Hitler and Anyone Who Says Otherwise is Full of Sh*t!” (VIDEO) appeared first on The Gateway Pundit.