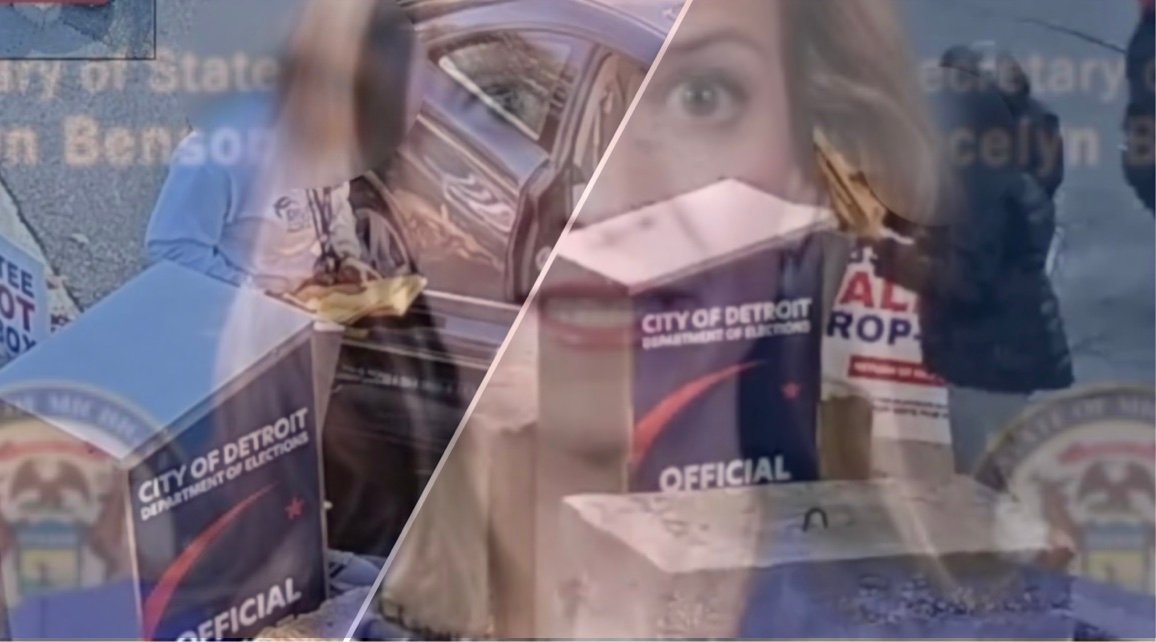 100 Percent Fed Up reports – The Gateway Pundit and 100 Percent Fed Up have been working with a team of investigators at MC4EI to uncover potential voter-related crimes and “irregularities” found on hundreds of hours of Detroit satellite office surveillance footage. After months of pouring through 24 terabytes of data, MC4EI was able to put together a compilation of voter after voter dropping off more than one ballot into a drop box in Michigan. Over 16,000 hours of surveillance footage from 37 days of early voting were carefully scrutinized. To the best of our knowledge, no other state in the nation has done a more thorough investigation into early voting via drop boxes than in Michigan, where election law says only one ballot may be case per voter, except a voter who deposits ballots on behalf of an immediate family member or immediate family members.

On Wednesday, Jocelyn “Zuckerbucks” Benson’s MI Department of State tweeted a “FACT CHECK” to address “Videos circulating online of the handling of absentee ballots in the 2020 election.” Videos circulating online of the handling of absentee ballots in the 2020 election imply wrongdoing when there are legal explanations for what may be portrayed.

FACT CHECK: Videos circulating online of the handling of absentee ballots in the 2020 election imply wrongdoing when there are legal explanations for what may be portrayed. https://t.co/GKEZu1HhTn pic.twitter.com/oT5bjA7k8P

To date, SOS Benson has not conducted a single investigation into individuals or teams of people where one person dropped stacks of ballots into the absentee ballot drop boxes while the other one was filmed. In another scene, a pickup truck pulls up to the drop box, takes photos (or video) of the satellite voting center and drop box, and then leaves. As the pickup truck (or scout vehicle) pulls out, they pass a car that pulls up to the drop box and deposits a stack of ballots. The person depositing the stack of ballots doesn’t need to take photos this time because the pickup truck (scout vehicle) appears to have documented their drop-off for them.

Instead of calling for an investigation into what most people believe are instances of ballot trafficking, Benson turns the tables on media members who are exposing the potential criminal activity and suggests they are spreading “misinformation.” In other words, instead of entertaining the possibility of investigating potential criminality at the Zuckerberg-funded drop boxes, she is gaslighting media members and attempting to make them look like criminals.

Michigan’s Democrat SOS Jocelyn Benson claims that although the law only permits each registered voter to drop their OWN ballot into the drop box, they may also drop the ballots of an immediate family member into the drop box.

Wow, Jocelyn! The woman in this video with the massive stack of ballots, who also brings a friend along to video record her making the deposit into a Detroit drop box, must have a REALLY big family!

In her statement above, SOS Benson addresses USPS workers making several trips in one day to the same drop box. Her “fact check” points out that USPS workers are required to expedite the return of election mail either by delivery to the clerk’s office or drop box.

We’ve shared video footage of two postal workers making several trips within a short period of time in one day to the same drop box to drop off ballots.

In the first video, we show a USPS worker dropping absentee ballots into the drop box at the Liberty Temple satellite voting center drop box on Oct. 29 at 4:17 pm and again at 5:50 pm.

The election is 6 days away…why in the world does the USPS worker have to “expedite” getting the ballots into a drop box 6 days before the election???

In the second video, we show a USPS worker making multiple deposits of absentee ballots at the same Liberty Temple satellite voting center drop box on November 2 at 3:35 pm, 4:49 pm, 4:58 pm, and again at 5:31 pm. On the final trip to the drop box, the postal worker is driving what appears to be a vehicle that is not marked for official postal business and appears to be a privately owned vehicle.

Does Jocelyn Benson care that the USPS passenger who is seen making one of 4 drops on the same day within a 2-hour period makes the ballot drops dressed in jeans and is not even wearing a USPS uniform?

Michigan Citizens For Election Integrity (MC4EI) responded to the “fact check” tweet with their own fact-check that’s based on MI Election law:

Another flaw in your “fact check”: USPS carriers are permitted to transmit ballots with STAMPS on them through the mail, but if there is NO stamp, as in the case of ballots to be deposited into drop boxes, they are NOT PERMITTED – it’s not “in the course of doing their job” MC4EI tweeted. To be clear, Jocelyn Benson has not made any public announcements about investigations that are being conducted into the shocking video footage we’ve released; instead, she attempts to discredit our hard work to reveal the truth. The MI Secretary of State was hired to represent EVERY citizen in Michigan, not only those who agree with her radical leftist Democrat politics. Is she not even remotely curious about why dozens of ballots at once were dropped into drop boxes?

It’s also unclear why Jocelyn Benson didn’t tweet about the “fact check” related to the videos we’ve been releasing on her personal Twitter account, which she frequently uses to mock or threaten anyone who challenges her. Our guess is she doesn’t want to be the face of the tweet that accuses us of “misleading” people since she knows there is nothing “misleading” about the videotaped evidence collected from the Detroit drop boxes.

Only yesterday, Benson referenced a Zoom call where citizens discussed ways they can ensure the elections in November are not stolen. The Zoom call was infiltrated by Democrats and then shared with the media. Benson amplified the story by re-tweeting it and, in her remarks, threatened election workers that she “will not tolerate anyone interfering with our elections or disrupting the voting process.”

If that’s true, Jocelyn, where’s the investigation into the people we see in the video delivering stacks of ballots to drop boxes, with some making multiple trips to the same drop boxes?

Let me be abundantly clear: I will not tolerate anyone interfering with our elections or disrupting the voting process.

We welcome and encourage citizens from all parties to work as poll workers, but anyone found breaking the law will be swiftly removed.https://t.co/v7LVVvnHOc

And where was your concern about the Detroit election trainer who was caught on a recording telling election workers how to tabulate challenged ballots and how to use law enforcement to intimidate GOP poll challengers prior to the 2020 election?

The audio that exposed the Detroit election trainer was published by Shane Trejo of Big League Politics and revealed how the election official trained Detroit poll workers how to handle ballot challenges from Trump supporters. She told them to call 911 on any challengers and to use COVID as an excuse to deny poll challengers access to view the ballots as they were being counted and tabulated.

Instead of investigating the individuals seen in these videos, MI SOS Benson’s office tweets a “fact-check” to discredit the Gateway Pundit and 100 Percent Fed Up for sharing the evidence of what looks an awful lot like ballot trafficking in broad daylight. Perhaps the reason the people in the video are boldly making drops of dozens of ballots at the same time into a single drop box in Detroit is that they can, without fear of retribution from Democrat SOS Jocelyn Benson and her good friend Democrat AG Dana Nessel…and that is really what needs to be addressed.

The post Most Dishonest Sec of State In America REFUSES To Investigate Explosive 13-Minute Video of Michigan Ballot Trafficking appeared first on The Gateway Pundit.