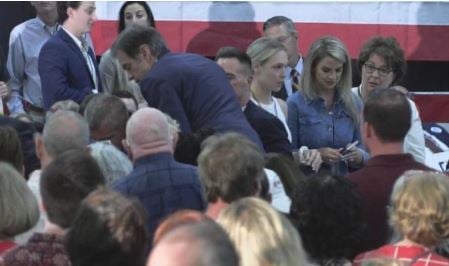 On Saturday Dr. Mehmet Oz jumped a rail and rushed into a crowd at his rally in Bucks County, Pennsylvania after a woman collapsed.

Dr. Oz tended to the woman until medics came.

Oz campaign spox says the woman at the event had fainted and that Oz assessed her as they waited for paramedics to arrive.

She was conscious as they took her out of the event

Just watched Oz hop the barrier and give aid to a woman that collapsed. He and State Senate candidates Matt McCullough who is a nurse and State Rep Frank Farry who is a fire chief also aided. pic.twitter.com/2P5EEWHqeZ

If you try to find more on Dr. Oz rescuing this woman on Twitter you will have to sift through dozens of attack tweets first. Twitter is starting early this year with its anti-GOP algorithms.

Breitbart reported: Mehmet Oz, the celebrity doctor and Republican Senate candidate in Pennsylvania, rushed into the crowd to help a woman who collapsed during his campaign rally in Bucks County on Saturday.

Medics at a @DrOz event wheeled out a woman who appeared to collapse near the stage. Oz rushed in from backstage and stayed with her until the stretcher came.

“Rita, god bless her, is doing well,” he said when he took the stage later. #PASEN pic.twitter.com/zYUA7Tvg88

1,200 supporters turned out to see Dr. Oz in Bucks County on Saturday.

Amazing crowd of over 1,200 fired up Pennsylvanians tonight in Bucks County! pic.twitter.com/yeU4Pi0N5K

The post Dr. Oz Rushes into Crowd and Rescues Woman who Collapsed at His Rally – Stays with Her Until Medics Arrive appeared first on The Gateway Pundit.