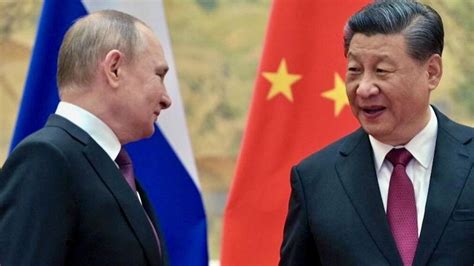 I am certain that most Americans do not have a clue what transpired this week at the meeting of the Shanghai Cooperation Organization (aka SCO). It is a clarion call, a defiant declaration, that the countries, which account for over half of the world’s population, are no longer going to defer to the United States. The attendees included Russia, China, India, Turkey, Iran, Pakistan, Egypt and Saudi Arabia.

The speeches by Russia’s Vladimir Putin and China’s Xi Jinping are especially noteworthy. Both countries put the United States on notice that the United States and NATO will be treated as a sponsor of terrorism because they supply weapons to Ukraine that are being used to attack civilian targets. You may accuse me of exaggerating because neither Putin nor Xi mention the United States or NATO by name. But the actions of the NATO allies in Ukraine are seen by both Russia and China as acts of terrorism. I am reprinting the salient portions of each speech below.

Russia and China also put the west on notice that Iran is no longer going to be treated as a pariah state. Iran is welcomed emphatically by both Putin and Xi as a member of the SCO. Going forward, this means that Iran will do business with all members of the SCO under the rubric of a new financial order being organized by Russia, China, India and Brazil.

I am sure this is jarring news to the western allies. They have enjoyed the luxury of the dominance of the U.S. Dollar as the international reserve currency. It was the Golden Rule at work–those with the gold make the rules. The United States faces a dilemma because it insists on levying international sanctions on any nation or leader who refuses to toe Washington’s line, but the blow back effects of those sanctions are savaging the European economies and will hurt America as well.

China and Russia now realize and affirm that the United States is no longer a reliable, trustworthy partner. They see the United States as a petulant child that, in the past, coerced others by throwing temper tantrums and launching ill-conceived, foolish foreign military operations.

Most important, but not said, the leaders of the SCO realize that Washington is leaderless. Biden is a demented buffoon. Putin demonstrated this in his press conference. He did not have a podium to lean on. He did not have a cheat sheet of journalists that instructed him who to call on. And he spoke intelligently off the cuff. Pay attention to what he says:

President Xi’s speech lays out in detail the future of the SCO:

Under these new conditions, the SCO, as an important constructive force in international and regional affairs, should keep itself well-positioned in the face of changing international dynamics, ride on the trend of the times, strengthen solidarity and cooperation and build a closer SCO community with a shared future.

First, we need to enhance mutual support. We should strengthen high-level exchanges and strategic communication, deepen mutual understanding and political trust, and support each other in our efforts to uphold security and development interests. We should guard against attempts by external forces to instigate “color revolution,” jointly oppose interference in other countries’ internal affairs under any pretext, and hold our future firmly in our own hands.

Second, we need to expand security cooperation. A proverb in Uzbekistan goes to the effect that “With peace, a country enjoys prosperity, just as with rain, the land can flourish.” The Global Security Initiative put forward by China is to address the peace deficit and global security challenges. It calls on all countries to stay true to the vision of common, comprehensive, cooperative and sustainable security and build a balanced, effective and sustainable security architecture. We welcome all stakeholders to get involved in implementing this initiative.

We should continue to carry out joint anti-terrorism exercises, crack down hard on terrorism, separatism and extremism, drug trafficking as well as cyber and transnational organized crimes; and we should effectively meet the challenges in data security, biosecurity, outer space security and other non-traditional security domains. China is ready to train 2,000 law enforcement personnel for SCO member states in the next five years, and establish a China-SCO base for training counter-terrorism personnel, so as to enhance capacity-building for law enforcement of SCO member states.

Third, we need to deepen practical cooperation. To deliver a better life for people of all countries in the region is our shared goal. The Global Development Initiative launched by China aims to focus global attention on development, foster global development partnership, and achieve more robust, greener and more balanced global development. China is ready to work with all other stakeholders to pursue this initiative in our region to support the sustainable development of regional countries.

Fourth, we need to enhance people-to-people and cultural exchanges. Exchanges promote integration among civilizations, which, in turn, enables civilizations to advance. We should deepen cooperation in such areas as education, science and technology, culture, health, media, radio and television, ensure the continued success of signature programs such as the youth exchange camp, the women’s forum, the forum on people-to-people friendship and the forum on traditional medicine, and support the SCO Committee on Good-Neighborliness, Friendship and Cooperation and other non-official organizations in playing their due roles. China will build a China-SCO ice and snow sports demonstration zone and host the SCO forums on poverty reduction and sustainable development and on sister cities next year. In the next three years, China will carry out 2,000 free cataract operations for SCO member states and provide 5,000 human resources training opportunities for them.

China supports advancing SCO expansion in an active yet prudent manner, and this includes going through the procedure to admit Iran as a member state, launching the procedure for Belarus’ accession, admitting Bahrain, the Maldives, the United Arab Emirates, Kuwait and Myanmar as dialogue partners, and granting the relevant applying countries the legal status due to them. We need to seize the opportunity to build consensus, deepen cooperation and jointly create a bright future for the Eurasian continent.

Here I wish to express China’s congratulations to India on assuming the next SCO presidency. We will, together with other member states, support India during its presidency.

Putin’s speech is short and to the point. :

I fully share the statements made by my colleagues and their positive assessments of the work of the Shanghai Cooperation Organisation and its growing prestige in international affairs. Indeed, the SCO has become the largest regional organisation in the world.

However, I would like to repeat that global politics and economy are about to undergo fundamental and irreversible changes. The growing role of new centres of power is coming into sharp focus, and interaction among these new centres is not based on some rules, which are being forced on them by external forces and which nobody has seen, but on the universally recognised principles of the rule of international law and the UN Charter, namely, equal and indivisible security and respect for each other’s sovereignty, national values and interests.

It is on these principles, which are devoid of all elements of egoism, that the joint efforts of SCO member states are based in politics and the economy. This opens up broad prospects for continued mutually beneficial cooperation in politics, the economy, culture, humanitarian and other spheres.

Fighting terrorism and extremism, drug trafficking, organised crime and illegal armed formations remains a priority of our cooperation. Other key areas include providing assistance in the political and diplomatic settlement of conflicts along our external borders, including in Afghanistan. . . .

In this context, Russia, no doubt, favours the earliest possible accession of the Islamic Republic of Iran to the SCO, which is what the documents and the memorandum that will be signed today are designed to accomplish. We are convinced that Iran’s full-fledged participation will be beneficial for the association, as that country plays an important role in the Eurasian region and the world at large.

We also fully stand behind the decision submitted for approval by the Heads of State Council to start the process of admitting the Republic of Belarus as an SCO member. Let me be clear that we have always advocated that Belarus, which is Russia’s strategic partner and closest ally, should participate fully in the SCO. This will undoubtedly improve our ability to advance unity in politics, the economy, security and humanitarian matters.

In the past, the United States controlled the ball and set the rules for the game. The countries of the SCO are no longer going to let the United States dictate where, when and how the game is played. They are bringing their own ball and setting up their own rules. I apologize for the poor metaphor in advance, but this is bit like the PGA Tour being shocked and outraged by the emergence of an alternative professional golf tour, LIV. There is a new and potentially more powerful player on the world stage and the United States may be relegated to the peanut gallery and forced to watch.

The post Will The United States and NATO Wake Up To What Happened at the Meeting of the Shanghai Cooperation Organization? appeared first on The Gateway Pundit.