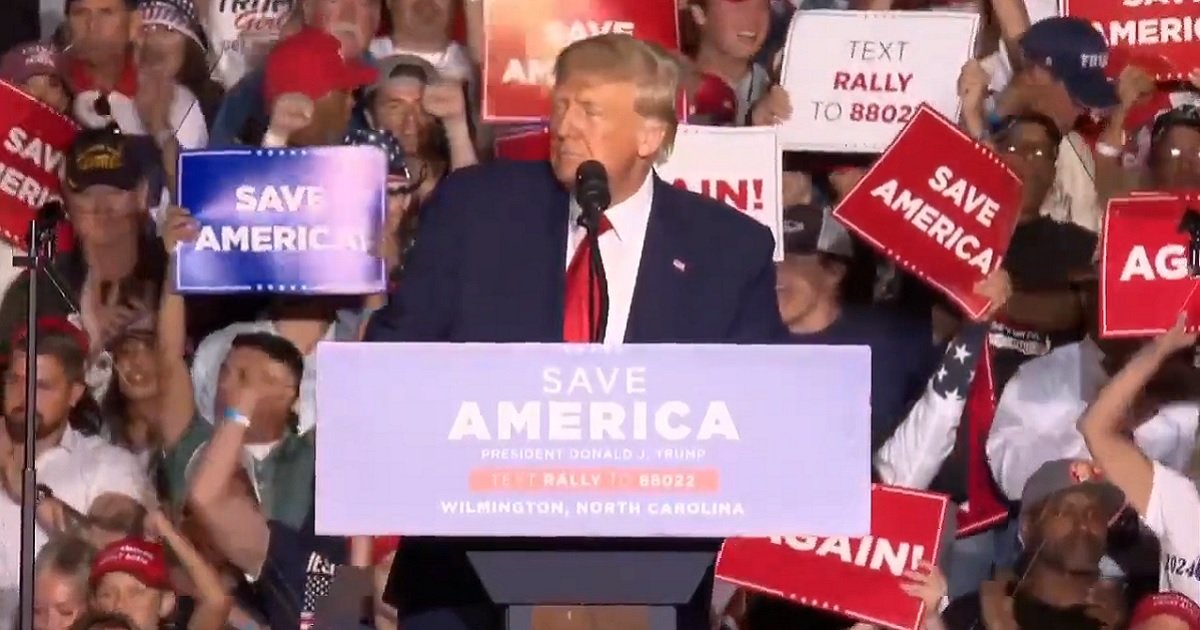 Former President Donald Trump drove a rally crowd wild when he spoke about the 2024 presidential election.

Trump was speaking Friday at a rally in support of North Carolina U.S Senate candidate Rep. Ted Budd, according to WECT-TV in Wilmington.

Trump predicted that his political movement would recapture the White House in the 2024 presidential election.

Speaking at the outdoor Aero Center at Wilmington International Airport, Trump first predicted that Republicans would secure majorities in the House of Representatives and the Senate in the November midterms, a goal for which Budd’s election will be crucial.

Trump made an apologetic nod to Budd when referring to 2024 as the most important milestone facing the Make America Great Again movement, admitting that the contest was even more important than the midterms.

“We’re going to take back our magnificent White House.”

The nine-word pledge was met with thunderous applause.

Trump also promised to restore federal immigration enforcement from the dismal state it’s been reduced to under President Joe Biden, by reinstating the policies of his administration as well as backing up agencies like Immigration and Customs Enforcement and Customs and Border Protection.

“We will shut down Biden’s border disaster, re-institute our strong Remain in Mexico policy.

“Strengthen the patriots of ICE, and Border Patrol… We will again end catch-and-release, we will end chain migration… All things we did before! They just had to leave it alone.”

“We will end the visa lottery, which is a disaster, we will clamp down on illegal immigration just like we did less than two years ago, when we had, again, the greatest, strongest border in the history of our country.”

Trump has repeatedly suggested he intends to run for president in 2024. Considering the populist billionaire’s enduring support in the Republican Party, many political analysts view the prospect of a Trump 2024 campaign as a matter of “when,” rather than “if.”

Polling suggests Trump is heavily favored to win the Republican nomination for president in 2024, with some surveys even showing the 45th president with an outright majority of support.

“Thousands were at Aero Center at Wilmington International Airport to hear from Trump,” WRAL-TV in Raleigh reported. “People in line said they came from various parts of the country including South Carolina, Pennsylvania and New Jersey. They said they realize how much North Carolina is a battleground state.”

Trump would become the second president in American history to serve non-consecutive terms in office if re-elected in 2024.

A Trump-linked super PAC is also expected to significantly invest in support of midterm candidates whom the former president has endorsed, according to a Politico report.

The post Watch: Trump Says the 9 Words Everyone Wanted to Hear – Met with Thunderous Applause appeared first on The Gateway Pundit.