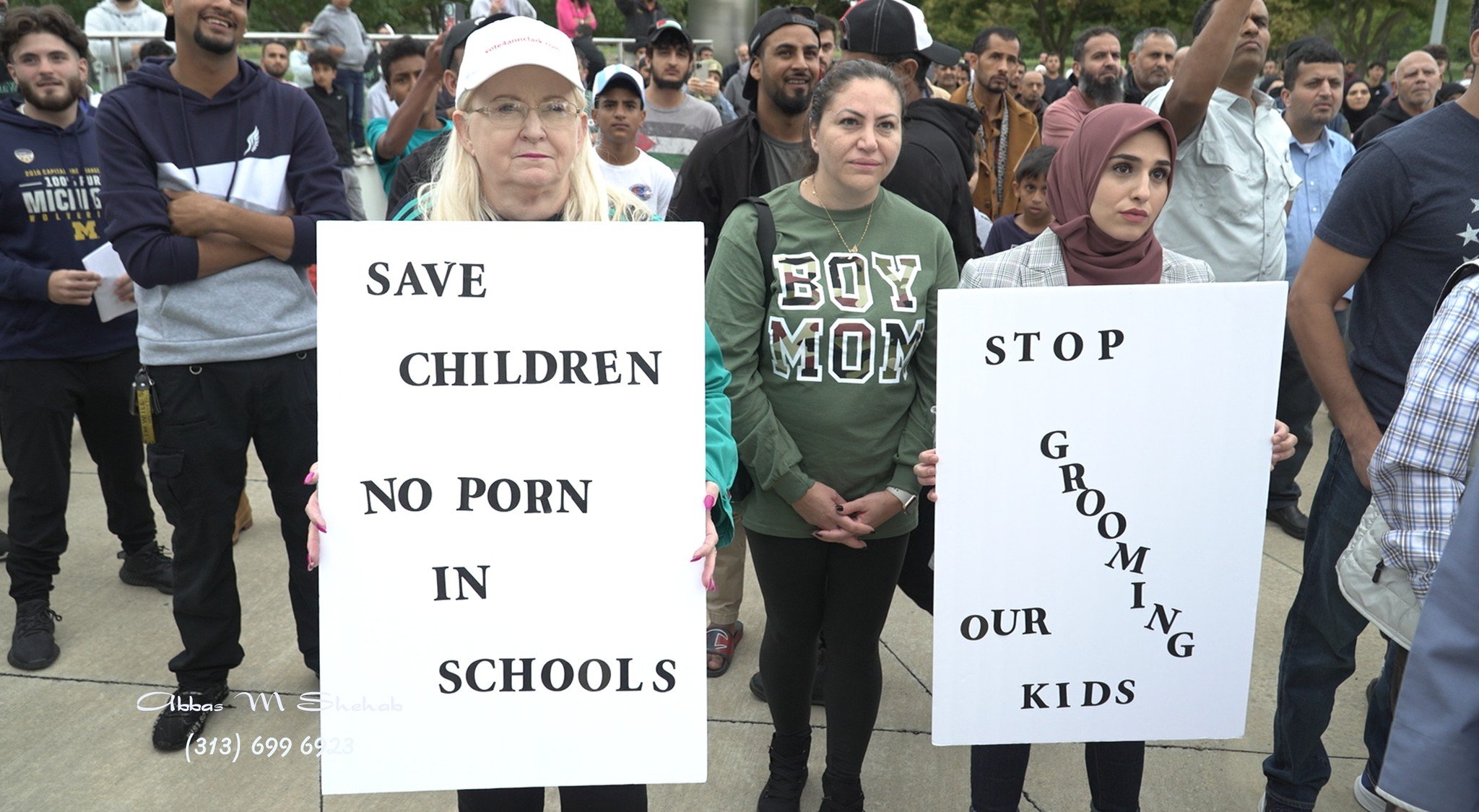 100 Percent Fed Up exclusive report – How far are parents willing to let leftist educators go when it comes to the indoctrination of their children before they say “enough!”? Will the Democrat lawmakers and leaders who are supporting the theft of our children’s innocence pay a heavy price for supporting this radical “families last” ideology? This weekend, a huge group of over 800 parents in the predominately Arab community of Dearborn, MI, came together to fight back against the sexualization of our children in public schools. The huge crowd included Muslims, Christians, and Jews who are fed up with the sexualization of their children and are coming together to fight back. Their goal is simple—Protect our children from the radical agenda of educators who allow explicit material on library shelves in public schools that can be accessed by students without consent from their parents. Two of the organizers stand on the stage next to an American flag and behind a graphic visual from an explicit book that the protesters are asking to have removed from the shelves of their children’s libraries.

Mike Hacham, a young, conservative Republican Muslim, was one of the organizers of the protest that brought together people of many faiths, including Jews, Muslims, and Christians, for a common cause—saving our children and our families from the radical Left. One of the speakers at the event told the crowd, “There’s a book called ‘This Book is Gay,’ and I tell you if it was the book was called, “This Book is Straight,’ we’re still gonna go after it because it’s teaching kids how to go online and have intercourse with others on the internet!” He later told an interviewer that the parents were at the rally to let the school board know they want to work with them, and not against them, to make sure their children are protected.

We spoke with Mike Hacham earlier today. Mr. Hacham told us that the majority of the Muslim population in Dearborn have conservative values and don’t want their children being radicalized by woke, leftist educators in their children’s schools; they want them to be learning about “microbiology, nuclear energy and

Stephanie Butler (pictured below) is one of the organizers of the event. “We the people of Dearborn will stand for such a thing!” AG Dana Nessel, the top law-enforcement officer in Michigan is not going to advocate for families who want to stop the sexualization of their young and innocent children. In fact, Nessel, who is up for re-election in November, has made her position on sexualizing young children crystal clear, calling for a “drag queen for every school.”

GOP AG candidate Matt DePerno, who, unlike Nessel, is on the front lines of the fight with parents to protect our children. DePerno has made his position on the sexualization of our children in schools crystal clear—he will always put the rights of our children and of their parents first.

According to conservative Republican Mike Hacham, the Yemeni population was in the majority at their protest. “These are very religious people,” Hacham explained. These parents are not going to put up with the indoctrination of our children, and “most of them will be voting for Republicans” in the upcoming election. An estimated 125 mostly white, female, leftist protesters showed up on the front steps of the Henry Ford Centennial Library to advocate for books with sexualized content on the shelves of public school libraries. The organizers for the Rally To Protect our Children asked their protesters to ignore the counter-protesters and even gave them additional time to speak when their time ran out before they were finished delivering their message out of respect for their right to free speech.

In Michigan, a group of leftist [Democrat] activists were able to get Proposal 3 to appear on the upcoming ballot in the November election. If this far-left radical proposal wins, in addition to women being able to have an abortion up to the time of birth…YES, I did say up to 9 months of pregnancy—our young children will also be permitted to be sterilized, have sex change treatments, and abortions—all without consent from their parents!

This evil has to stop, Michigan! Vote NO on Proposal 3 to STOP the government takeover of our children! All photos were taken by Abbas M. Shehab and were shared with permission by organizer Mike Hacham.