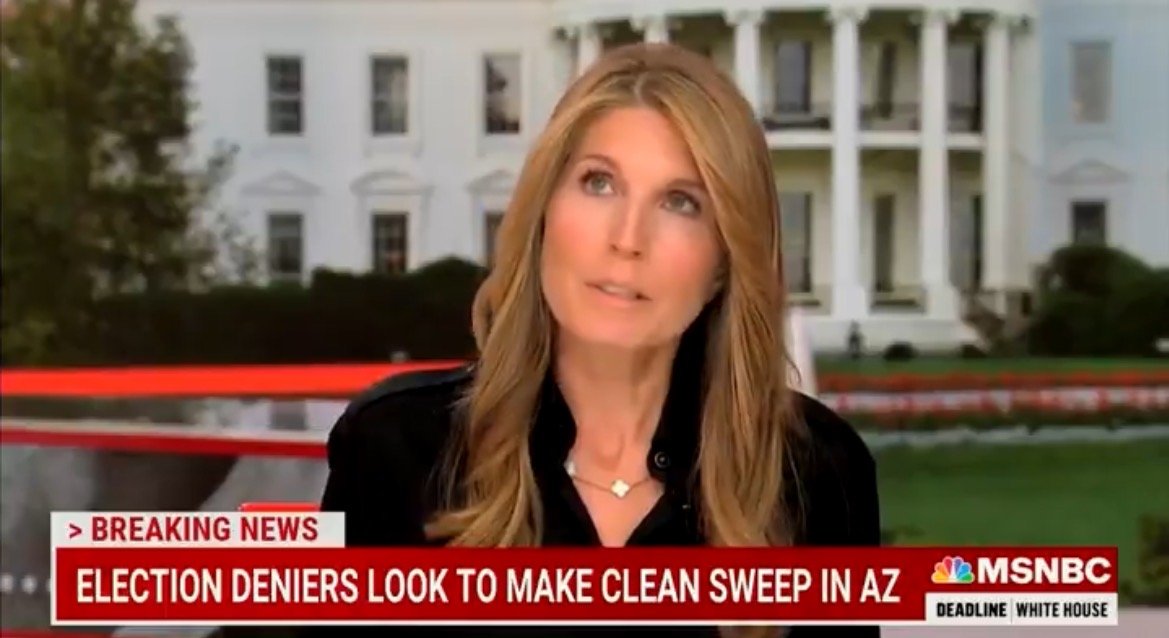 MSNBC’s Nicolle Wallace on Monday melted down over Trump’s Mesa, Arizona rally and his support for the so-called Republican ‘election deniers.’

She wants to use lawyers and politicians to shut down dissent.

“They are running to sow discord in America!” Wallace exclaimed. “And it will change everything. We will wake up the morning after ‘election day’ and we might not even call it that anymore in two years! We might not call it Election Day. We might call it ‘Election Week’ because what we are watching – because it’s so slow… we don’t cover it as a five-alarm fire, but it is!”

“We are watching Republicans not just destroying democracy in the dark…we’re watching them do it from rally stages, debate stages! That’s where they’re doing it!” she said.

Wallace then suggested an Obama-led “Democracy commission” would save America…. from American citizens exercising their First Amendment rights to hold rallies and debate.

“Do you think it requires, you know, a Democracy Commission? she said.

“Should President Obama (politician) ask Chris Christie (politician and lawyer) and Ben Ginsberg (lawyer) to man a democracy hotline the way people used to man other crises? What should we do?” she said.

These people are desperate and scared.

MSNBC’s @NicolleDWallace: How about we create an Obama-led “democracy commission” to save America from Republicans? pic.twitter.com/kYBRtkjOgv

Did Nicolle Wallace have the same melt down after the Democrats went on and on about the Russian collusion hoax?

Did Nicolle Wallace cry that the sky was falling after Hillary Clinton and the Democrats claimed for years – without any evidence whatsoever – that Trump worked with Russia to win the 2016 election?

The post MSNBC’s Nicolle Wallace: How About We Create an Obama-Led “Democracy Commission” to Save America From Republicans (VIDEO) appeared first on The Gateway Pundit.