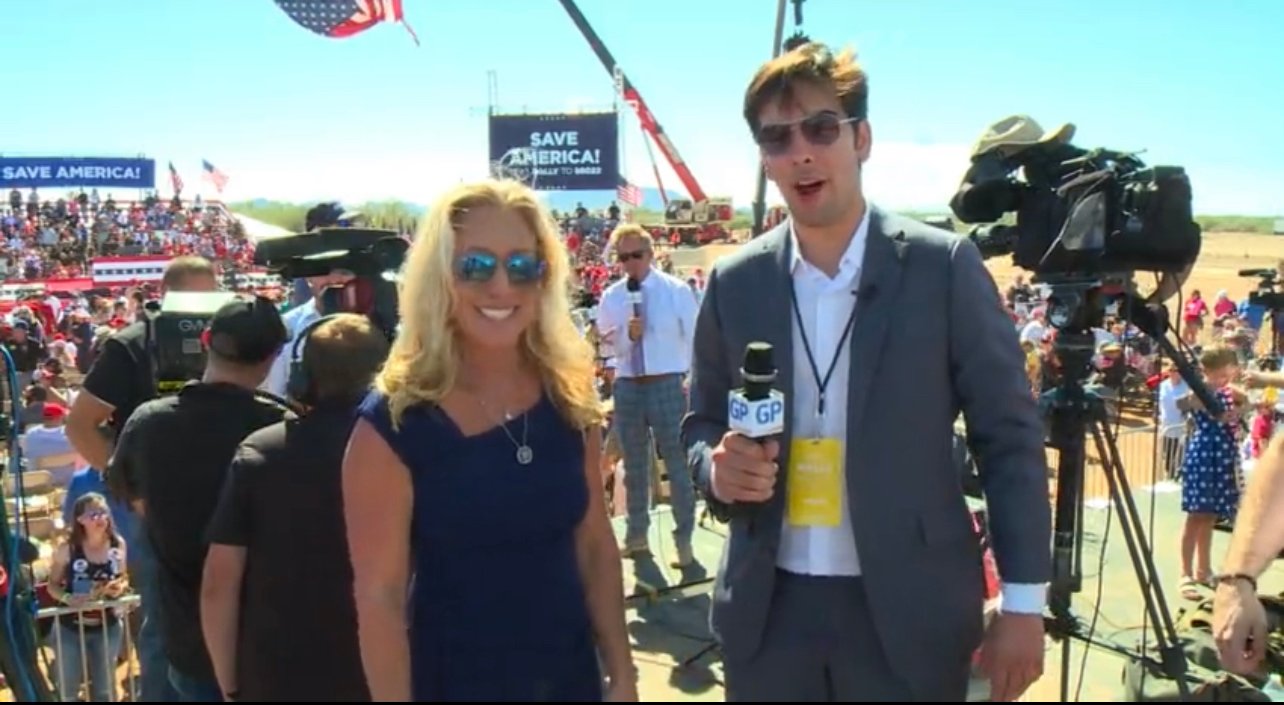 The Gateway Pundit correspondent Jordan Conradson spoke to Congresswoman Marjorie Taylor Greene at President Trump’s Save America rally in Mesa, Arizona, on Sunday, where he said that Arizona must elect Kari Lake for eight years in the Governor’s office.

Tens of thousands of Patriots turned out to see President Trump and his Trump-Endorsed Slate of candidates speak at the rally.

Arizona may have the strongest conservative candidates in the country running in the Grand Canyon State.

Kari Lake, Blake Masters, Abe Hamadeh, and Mark Finchem are expected to change the trajectory of the State by enacting America First policies in every single seat.

Representative Marjorie Taylor Green spoke about the importance of supporting these America First candidates up and down the ballot — especially Kari Lake — who all share the same values as Rep. Greene and President Trump.

The Gateway Pundit reported that Kari Lake gave President Trump a great hug while speaking at his rally on Sunday and vowed to never walk away from him or the people of Arizona.

Kari Lake is running against radical twice-convicted racist Democrat Katie Hobbs, who abused her power as Secretary of State to steal the 202o Presidential Election from President Trump.

We have reported on the hundreds of thousands of illegal, fraudulent, and questionable ballots that were counted in the 2020 Presidential election. Katie Hobbs still has not recused herself from election oversight duties in her own election for governor.

In addition to this, Katie Hobbs fought against historic school choice expansion while seeking to lock minority communities in failing school districts, and she recently struggled at a Hispanic gubernatorial forum last week to name one good thing about the Hispanic community of Arizona.

We reported on a recent statement by Kari Lake, calling for accountability and an explanation from her racist Democrat opponent.

Hobbs refuses to debate Kari Lake because of her record of racism and stolen elections.

It is more important than ever that Arizona elects a conservative America First candidate to secure the border, secure elections, and fight for ALL Arizona families.

Arizona cannot have a racist election fraudster in the Governor’s office.

Rep. Greene also spoke about her extraordinary sweepstakes offering a hog hunting trip from a helicopter for two!

The Gateway Pundit recently reported on a new advertisement video from MTG, where she is seen hunting wild hogs from a helicopter.

Here, she offers the chance to win an all-expense paid hunting trip for American Patriots to help American farmers deal with the varmints that rate destroying their fields along with Democratic policies.

Conradson: Representative Green, what are you going to be speaking about at the Trump rally today?

Greene: I’m going to be telling Arizona how critical it is for them to get out and support President Trump’s endorsed slate of candidates right here in Arizona. And the reason why is I work in Washington DC, under the reign of the radical Democrats: Joe Biden, Nancy Pelosi, and the rest. And I’m watching first-hand the destruction of this country. And while I’m committed to working at the federal level and supporting all 50 States, I’m here because this State has got to elect Kari Lake as their Governor not just for four years, but they need her for eight years. And I’ll be supporting her policies because we share the same policy. It’s about our faith, our families, and our freedoms, loving America for all Americans, and that’s why I am here.

Conradson: I love it. You know, one thing I love about you, you got swatted twice in a row, but you didn’t care. You didn’t seem to mind it. Instead, you released an epic new video recently where you were shooting hogs from a helicopter. That probably triggered the leftists. Can you tell us more about your sweepstakes?

Greene: Absolutely. This is something anyone can sign up for, and I really want everybody to be going hog hunting with me from the helicopter, which is so much fun because hogs are tearing up farmers’ fields. And Democrats’ policies are destroying farmers’ ability to be able to grow and sell their produce and their meat, which is what all of us want. So, it’s a lot of fun, and I’m excited, so I hope everybody signs up.

The post VIDEO: In TGP Exclusive Interview Rep. Marjorie Taylor Greene Opens Up on Kari Lake Endorsement and Her Hog Hunting Contest at President Trump’s Save America Rally In Arizona appeared first on The Gateway Pundit.