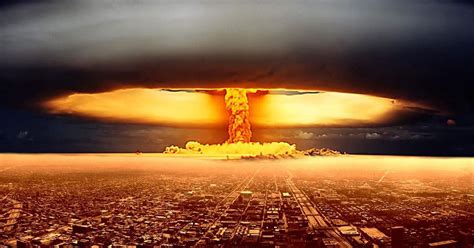 NATO is playing a dangerous game that poses a risk of escalating into a nuclear war with Russia. Sorry to ruin your day. NATO is kicking off its annual nuclear weapons exercise today–i.e. STEADFAST NOON. Although this exercise has not been ginned up in response to Russia’s invasion of Ukraine, it comes at a delicate time and will have Russia raising its nuclear alert level. While it is true that NATO conducts this exercise every year at this time, it is foolish to pretend that the war in Ukraine is irrelevant. Why? Because NATO is exercising deploying nuclear weapons, arming planes with those weapons and simulating an attack on Russia. Do you think the Russians do not care?

I want you to understand the history behind this exercise. Here is the description from the 2020 version of Steadfast Noon, which the Netherlands hosted:

“Today’s exercise shows that allies are determined to ensure that NATO’s nuclear deterrent remains safe, secure, and effective,” said NATO Secretary-General Jens Stoltenberg while visiting Volkel Air Base in the Netherlands for the exercise on Oct. 16. “The purpose of NATO’s nuclear deterrent is not to provoke a conflict but to preserve peace, deter aggression, and prevent coercion.”

This year, the training flights took place over parts of western Europe and the North Sea.

The annual exercise, known as Steadfast Noon, is designed to practice and assess NATO’s nuclear capabilities deployed in Europe. It is planned far in advance and involves more than 50 aircraft from several allied air forces. The aircraft do not carry live bombs during the exercise flights.

The United States deploys an estimated 20 B61 tactical bombs each at Büchel and Volkel air bases, according to the Federation of American Scientists. About 100 U.S. tactical bombs are believed to be deployed at bases in Belgium, Italy, and Turkey.

The seemingly innocuous phrase, “training flights”, is a euphemism for loading planes with mock-up nuclear weapons and sending them on a flight pattern that simulates attacking Russia. Nothing provocative there, right?

NATO announced Monday that it had started its annual nuclear exercise code-named Steadfast Noon. The week-long exercise is taking place over Southern Europe and involves aircraft and personnel from 14 NATO countries.

According to the NATO statement, “Steadfast Noon involves training flights with dual-capable fighter jets, as well as conventional jets, backed by surveillance and refuelling aircraft. No live weapons are used. This exercise helps to ensure that NATO’s nuclear deterrent remains safe, secure and effective.”. . .

The second nuclear base in Italy – Ghedi near Brescia – that might be part of Italy’s hosting of this year’s Steadfast Noon exercise, is currently undergoing several important nuclear weapons related modernizations that are intended to serve the NATO nuclear strike mission for years.

Belgium and the UK are hosting this year’s version of Steadfast Noon:

Steadfast Noon, as the exercise is known, runs from October 17 to October 30 and will involve 14 countries and up to 60 aircraft of various types, including fourth and fifth generation fighter jets, as well as surveillance and tanker aircraft.

As in previous years, US Air Force B-52 long-range bombers will take part. This year, they will fly from Minot Air Base in North Dakota. Training flights will take place over Belgium, which is hosting the exercise, as well as over the North Sea and the United Kingdom.

This could be worse. Can you imagine the implications if Poland or Lithuania played host? That would have put a potential nuclear war on a hair trigger. I do not know if the planners intended to use Belgium and North Sea air space all along or if the area of operations was changed six months ago.

These exercises normally are planned 18 months in advance. You start with a pre-planning conference, which is then followed by subsequent planning conferences where the scenario is developed and refined. In addition to NATO personnel, the planning process includes contractors who help write the message traffic that simulates communications between affected nations and the NATO chain of command. When the process is complete there is a MSEL–i.e., Master Scenario Events List–that functions like a Director’s script for a movie. The MSEL dictates who does what, when they do it and where they do it.

What makes this year’s STEADFAST NOON so dangerous is that it is occurring while Western threats of using nuclear weapons against Russia are being tossed around carelessly. In fact, Russia is being accused of threatening to use nukes–it has made no such threat–as further justification for carrying on with this exercise.

The smart move by the West, in light of the heightened tensions with Moscow, would have been cancelling the exercise. The West is not smart:

The main part of the manoeuvres would be held more than 1,000km (625 miles) from Russia, said an official from NATO, the North Atlantic Treaty Organization.

“It would send a very wrong signal if we suddenly now cancelled a routine, long-time planned exercise because of the war in Ukraine. That would be absolutely the wrong signal to send,” Stoltenberg told reporters on the eve of a meeting of NATO defence ministers in Brussels.

Actually, cancelling the exercise would have eased tensions with Russia. At this point, you have to assume that the Russians believe the West is using this exercise as a pretext to attack Russia with a preemptive nuclear strike. While I do not believe that NATO will cross that line, at least not now, this represents an unnecessary provocation when nerves are on edge in NATO and in Russia. Let’s pray that cooler heads prevail.

Please take time to watch Andrei Martyanov’s excellent overview comparing U.S. and Russian nuclear and radar capabilities if you want to understand the potential peril that awaits the world:

The post From “Steadfast Noon” to “One Minute to Midnight” – Is NATO Going Nuclear? appeared first on The Gateway Pundit.