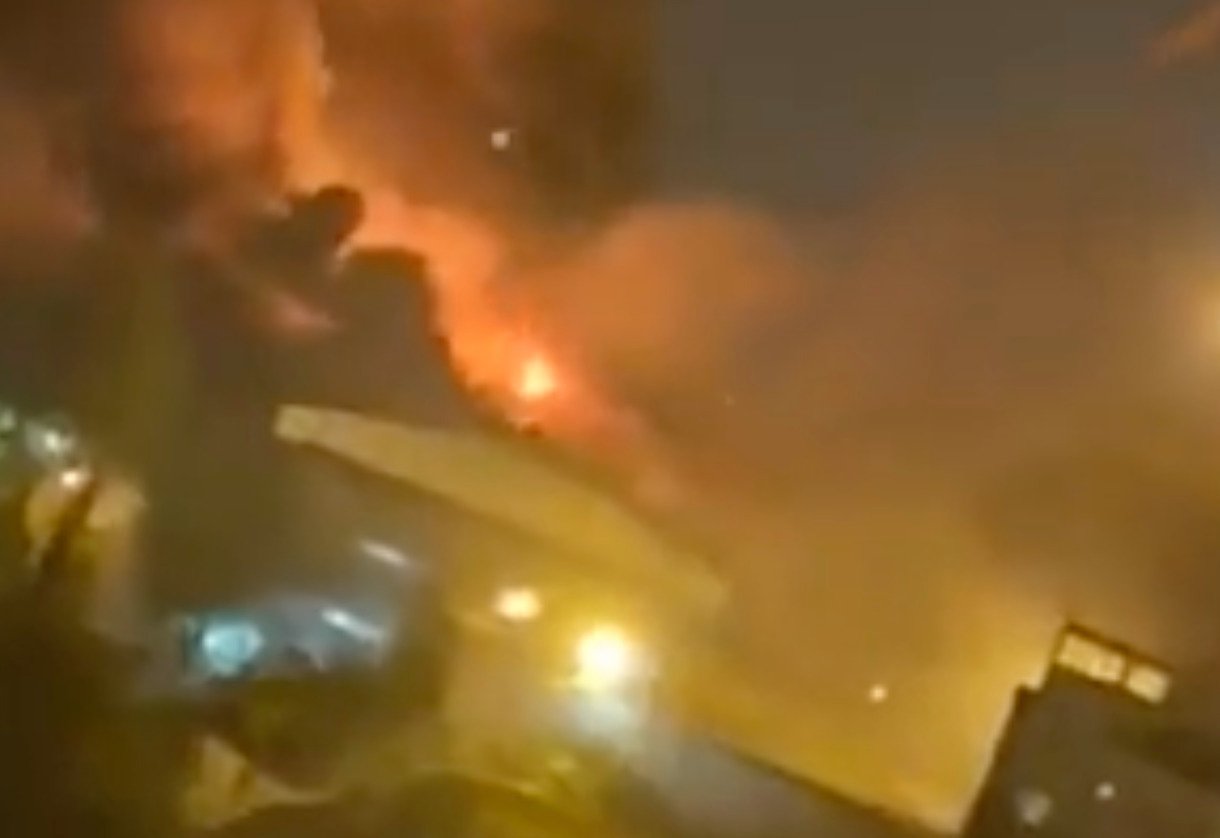 Iran’s infamous and brutal Evin prison is on fire after weeks of protest against Iran’s brutal regime.

The Gateway Pundit has reported on the massive the protests occurring against the regime in response to Iranian woman Mahsa Amini’s  death from injuries sustained after her arrest for the “improper” wearing of a hijab.

Since Amini’s death,  Iranian men and women have continued to protest against the regime’s brutality.  The brutality against the people of Iran includes firing on protesters with an AK-47 ,  firing indiscriminately on protesters in the street from their moving vehicles, murdering Hadis Najafi , a powerful symbol of the uprisings, the kidnapping, torture, rape and murder of Nika Shakarimi and, sadly, so much more.

This week, a viral video shows an Iranian woman  being dragged by police by the neck and encircled by dozens of officers while the woman is abused by a gang of Islamic Republic oppressive forces.

Reports are now emerging that Evin prison is ablaze. Evin is infamous for allegations of torture, rape and horrific treatment of prisoners at the facility.

#evinprison is no ordinary jail. Is where the #islamic_regime has imprisoned the elite of writers reporters artists and politicians.
Be our voice
Evin is burning in fire @POTUS44 https://t.co/Irx1K5iQ6O

Iran-Human Rights Monitor provides disturbing detail of the prison that holds many of the regime’s political prisoners. A huge fire erupted at an infamous Iranian jail which houses political prisoners in the nation’s capital tonight, as unrest in the country continues following the death of 22-year-old woman who was detained by police.

Unrest erupted at the notorious Evin prison in northern Tehran on Saturday night, the Oslo-based group Iran Human Rights reported, amid protests over the death of Mahsa Amini, who died after being arrested for wearing a hijab that was ‘too loose’.

Gunshots, explosions and chants of ‘death to the dictator’ were all heard in the capital, and witnesses told MailOnline they heard automatic guns being fired, thought to be by police.

State media reported that some inmates set fire to a prison warehouse and that the incident was under control, but gunshots continued to be heard into the early hours of Sunday as protesters gathered outside and internet was cut off.

There are allegations of torture, rape and horrific treatment of prisoners at Evin, which can hold up to 15,000 people.

It was where Nazanin Zaghari Ratcliffe was held during her six years of imprisonment in Iran.

The US-based Centre for Human Rights in Iran reported that an ‘armed conflict’ broke out within the prison walls. It said shots were first heard in Ward 7 of the prison, but this has not been confirmed.

Chants of ‘Death to Khamenei’ – referencing Iran’s leader and one of the main slogans of a month-long protest movement that has flared over the death of Amini – could be heard in the background of some videos.

BREAKING: Evin Prison, the infamous fortress where Tehran’s political prisoners are warehoused, is on fire today, October 15, with reports of gunfire from the facility pic.twitter.com/Gt6PJru2C4

Evin prison in Tehran. People on the ground say that they can hear shouting and gunfire. This jail is one of the most notorious in Iran for detaining and abusing political prisoners #IranProteste2022 #MahsaAmini pic.twitter.com/cctuHEjCvq

The post Chants of ‘Death to Khamenei’ Heard Outside Burning Iranian Jail Where Hundreds of Regime’s Opponents Held appeared first on The Gateway Pundit.