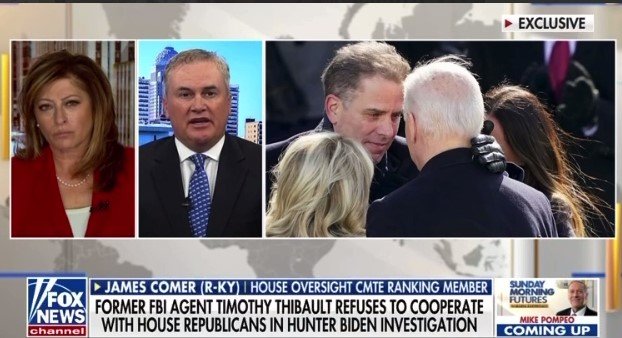 During their discussion, Maria pointed out that retired FBI agent Tim Thibault is refusing to cooperate with the House Republicans currently in their investigations of the FBI’s phony Trump-Russia scandal, the Hunter Biden scandal, and the Trump Mar-a-Lago investigation that he opened while working at the FBI. Thibault was also the FBI’s spokesman for election integrity before the 2020 election.

Rep. Comer said he would approve of an outside commission to investigate the corrupt FBI.

James Comer: “They’ve been influence peddling for a decade. And Hunter Biden has committed serious crimes. As you mentioned, 150 suspicious activity reports. Those are the most severe bank violations. This is when the bank notifies the federal government that we’re pretty confident that our client has committed a crime. He’s had multiple banks file 150 suspicious activity reports saying we believe each instance was another act of a crime. Yet the FBI did nothing about it…

…We’re investigating Hunter Biden because we believe he’s a national security threat. And we fear that he’s compromised Joe Biden. So, a lot of the bad policies, the energy policy, the foreign policy that Joe Biden has enacted that put America last. We believe he’s compromised because of his family’s shady business dealings with our adversaries…