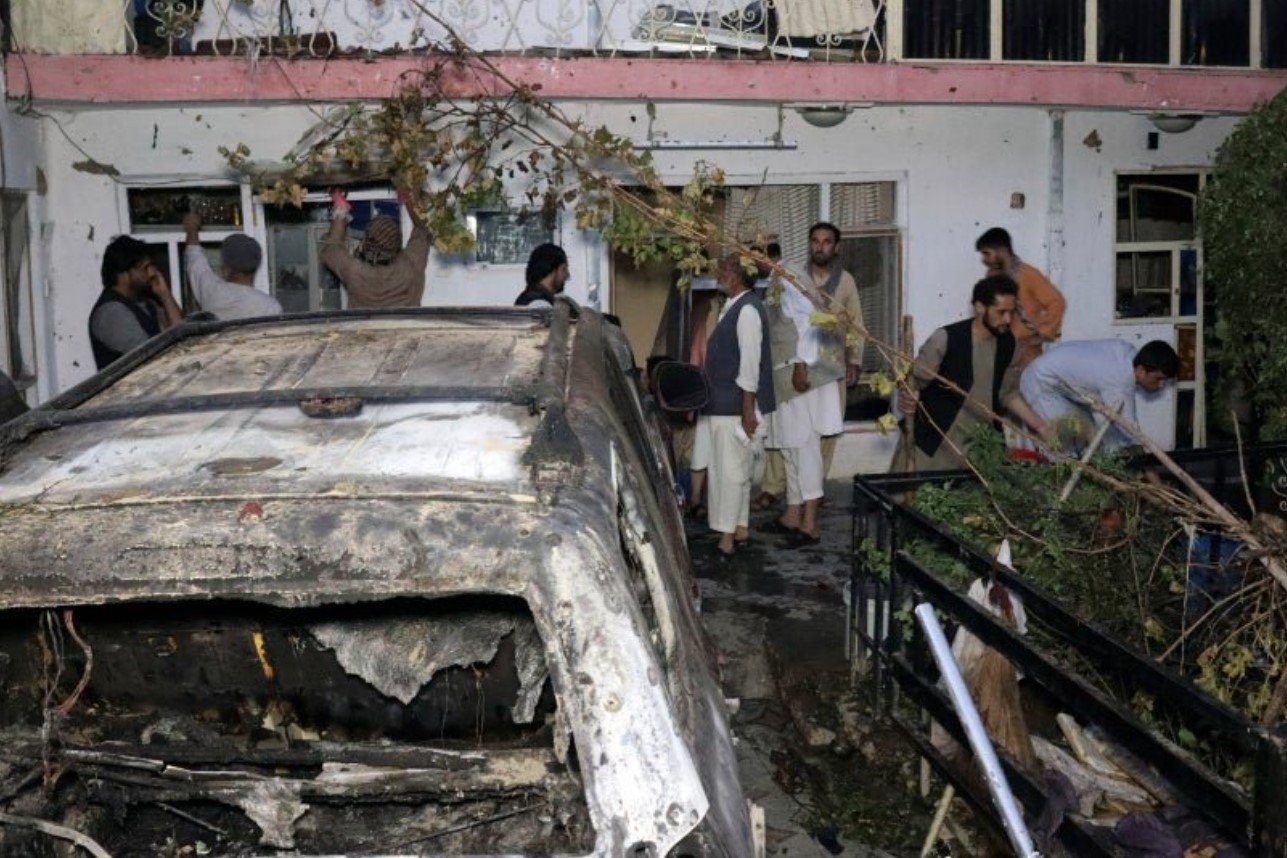 The Gateway Pundit has obtained leaked documents that the Biden regime has prepared a comprehensive, confidential plan for compensation and resettlement for undocumented Afghan refugees affected by the drone strike on August 29, 2021, including cash assistance for up to 60 months, Medicaid, and free education.

The Pentagon admitted they bombed the wrong vehicle and killed an Afghan family instead of ISIS-K terrorists in Kabul last year.

The military said it believed Zemari Ahmadi’s white Toyota Corolla, which it tracked by drone for eight hours that day, was packed with explosives. Security camera video we obtained showed him loading it with water containers for his home. I’ll detail our findings in this thread. pic.twitter.com/1hEaFBmcDo

Ten innocent individuals, including seven children, were killed in the botched U.S. drone strike last August 29 in Kabul during the final hours of Biden’s disastrous withdrawal from Afghanistan.

Nine #Afghans, inluding six children, were killed in a US drone strike in #Kabul.

Civilians who worked with American troops were among those killed by the strike in a residential area. pic.twitter.com/0Jviw5E5qH

The strike was ordered in the aftermath of the suicide bombing that tragically claimed the lives of thirteen US military members and over 60 bystanders, injuring over 150 more.

The terrorist who carried out the sickening attack was released from Bagram prison thanks to Biden’s horrific decision-making that left the jail unprotected when US troops pulled out of the area.

“Senior Indian intelligence sources familiar with the case have told Firstpost that he was handed over to the United States’ Central Intelligence Agency by the Research and Analysis Wing in September 2017. However, the jihadist walked free on 15 August along with thousands of other dangerous terrorists held in the high-security prison, taking advantage of the chaos that ensued in the aftermath of the United State’s hurried exit and the Taliban’s swift takeover of the entire country,” Firstpost reported.

Joe Biden abandoned Afghanistan’s Bagram Airfield after nearly 20 years in July 2021 by shutting off the electricity and slipping away in the night without notifying the base’s Afghan commander, who discovered the Americans’ secret departure more than two hours after they left.

The Taliban quickly took control of Bagram Air Base, which is only 30 miles north of Kabul, on August 15th and released thousands of terrorists held at its prison. The Americans and Afghans left the Taliban military equipment, uniforms, rations and even sports drinks.

According to our source, “Biden admin already set a detailed confidential plan of COMPENSATION and RESETTLEMENT for the Aug. 29 Drone Strike Afghan victims who had no passport!  These PASSPORTLESS  immigrants will receive a full supply of food, housing, cash assistance nearly $1,000 per month for 60 months, Medicaid, and free education!”

“A State Department office, as part of its routine preparation for all evacuees, will call you to ask you to scan and send documents to caretraveldata@state.gov,” according to the letter from the State Department with a heading, “Starting a New Life in the United States.”

“The call is made to the representative for each household, regardless of whether people have passports or not. The staff person making these calls does not have any background on your situation. Their job is to obtain and confirm identity information and the person will ask everyone the same check list of questions. For people with no passport who can not be evacuated by plane, a State Department coordinator or SEPAR will later call you about overland evacuation,” the letter added.

More from the letter:

Housing, Food, and Medical Needs: Once you arrive in the transit country, the U.S. government and its partners will be responsible for your housing, food, and medical needs and for your transport to the United States. The processing can take approximately 30 days.

Food: You will be able to apply for U.S. federal government assistance tor an electronic benefit transfer card that can be used to buy food from authorized retailers. Benefits levels are determined by a formula based on income and household size, but the estimated maximum monthly benefit is between $175 for an individual and $1,137 for a household of eight (and $188 for each additional member above eight).

Cash Assistance: You will be eligible to apply for U.S. federal government cash assistance. Benefits under this program last for up to 60 months. The maximum monthly benefit varies by state and depends on household size. If you are over 65 or have a disability, you may be eligible for additional benefits of up to $841 per month for an individual and $1,261 per month for a couple.

School for children ages 5-18, College: The public school year in the United States generally runs from September to June. Elementary and secondary education (from age five to are 18) is free. College age students will need to apply to a college in the United States it they wish to attend. The resettlement agency will be able to provide you with information on options.

See the full letter below:

Four versions of the compensation proposal for the survivors of the drone strike were also leaked. The range of compensation varies from $15,500 per month to $34,000 per month. See below:

View Fullscreen
“These are ironclad evidence to show how Biden abused power to import illegal immigrants, imposing a great threat to national security while letting American taxpayers pay for it.  It is a malicious and insane scheme to improve Democrat mid-term election. American voters deserve to know this white house shame!” said our source.