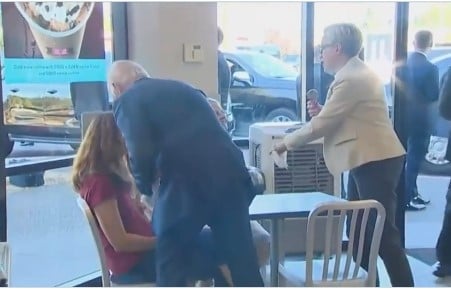 ICE CREAM AND A SNIFF–
Joe Biden traveled to Oregon to campaign for the lesbian Marxist running for governor. Oregon is a mail-in voting state so only Democrats win. You know Democrat Tina Kotek is a garbage candidate when she can’t even pull off an election in Oregon.

During his trip Joe Biden and Kotek stopped at a Baskin Robbins for ice cream.

Joe wasted no time in sniffing his latest victim.

Have you seen a video of Pedo Peter sniffing his next victim at Baskin Robbins in Oregon yesterday. pic.twitter.com/nmyCrlCX8p

— I Meme Therefore I Am

The post ICE CREAM AND A SNIFF: Joe Biden Manages to Sniff His Next Victim While Out for Ice Cream in Oregon appeared first on The Gateway Pundit.