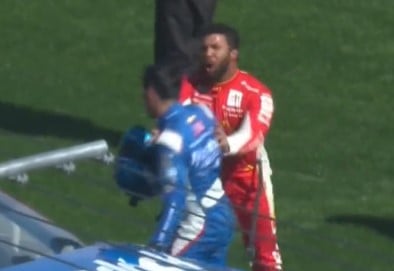 Bubba Wallace, NASCAR’s only top-level black driver and very vocal supporter of Black Lives Matters, is more recognized for his predilection for hate hoaxes than his racing.

In 2020, a fellow team member claimed to have found a noose in Wallace’s garage stall after NASCAR banned the use of the Confederate flag.

Bubba Wallace went on the Jussie Smollett tour, cried in his race car as fellow drivers stood in solidarity, utilized social media to garner sympathy and appeared in multiple interviews.

The FBI eventually released a statement on its investigation at Talladega Superspeedway and determined that Bubba Wallace was not the target of a hate crime. It was another race hoax.

“The FBI learned that garage 4, where the noose was found, was assigned to Bubba Wallace last week. The investigation also revealed evidence, including authentic video confirmed by NASCAR, that the noose found in garage number 4 was in that garage as early as October 2019,” the FBI said in a statement.

In other words, the garage door pull rope wasn’t imagined as a noose until a racist narrative needed to be pushed out to the public.

During Stage 2 at the South Point 400, Wallace’s temper was on full display when he went after fellow NASCAR driver Kyle Larson after a crash.

Wallace confronted Larson screaming at him and shoving him repeatedly.

Bubba Wallace and Kyle Larson were involved in a heated confrontation at Las Vegas Motor Speedway during Sunday’s South Point 400, with Wallace losing his temper after Larson ran him into the wall leading to Wallace wrecking Larson. The two then got into a shoving match in the infield.

Coming off Turn 4, Larson ran Wallace up the track and into the wall, a move Wallace responded to by hooking a left into Larson’s right rear fender, crashing them both as well as playoff contender Christopher Bell.

Still not satisfied, Wallace walked toward Larson’s car as Larson climbed out in the infield, confronting him and shoving him several times while Larson tried to walk away. The situation was eventually de-escalated by NASCAR officials.

Wallace spins him out, and #NASCARPlayoffs driver Christopher Bell is involved! pic.twitter.com/TlxcEV5T6q

Bubba Wallace is NOT HAPPY with Kyle Larson.

Some pushes and shoves after they wreck. #NASCAR pic.twitter.com/aaAn0idrJp