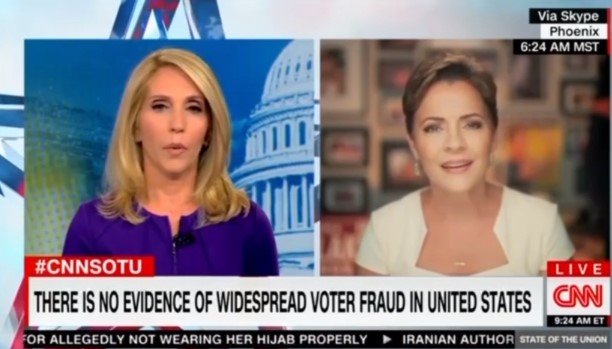 Trump-Endorsed Arizona Gubernatorial Nominee Kari Lake got into a tense conversation with CNN’s Dana Bash, who wouldn’t even let her finish a sentence, Sunday on CNN’s State of The Union.

CNN cut Lake’s audio when she was rudely interrupted by Bash, but Kari Lake is a trained professional, and she recorded her own audio of her appearance.

They spoke about the border crisis, Arizona’s record-breaking inflation, and election integrity.

However, The main topic of their conversation was the 2020 election, where Bash accused Lake of “election denial.” Lake mentioned the 2020 election fraud concerns and the 2022 Primary Election, where Republican voters in Pinal County were turned away from the polls because the County ran out of only Republican ballots one hour into election day, saying, “the problem is the media won’t cover it.”.

Bash also claimed that the issue in Pinal County was fixed with transparency because “county officials apologized.”  Lake called her out, saying, “an apology doesn’t bring somebody’s vote back.”

Kari Lake then slammed Katie Hobbs for her refusal to debate and her record of racism.

The Gateway Pundit has reported extensively on Democrat Katie Hobbs’ racist behaviors. It was recently discovered that Hobbs participated in and led her high school’s ‘Slave Day’ tradition with mock slave auctions and students shackled in chains.

During Hobbs’ time in the Arizona Senate, she was convicted unanimously by two separate juries of racial discrimination and discriminatory firing of a black woman, costing the State nearly $3 million in restitution.

We also reported on Katie Hobbs’ failure to name one good thing about Hispanic voters during a recent Arizona Hispanic Chamber of Commerce gubernatorial forum and her recent run-in with a black reporter where she freaked out, spilled her drink, and hid in a bathroom.

Dana Bash did not even ask Hobbs about her racist history after speaking to Lake.

Bash: I want to move on to another really important issue, particularly when it comes to your critical swing state of Arizona. And that is what happened in 2020. You called the 2020 election corrupt, stolen, rotten and rigged and there was no evidence of any of that presented in a court of law or anywhere else that any of those things are true. So why do you keep saying that?

Lake: Only one side of it. The real issue, Dana, is that the people don’t trust our elections. They haven’t since 2000. I’m a reporter I’ve been sitting on your side of the desk for a long time. And since 2000, we’ve had Americans who don’t trust our elections. In 2000 and in 2004 they didn’t trust the elections. In 2016, Kamala Harris, Amy Klobuchar, and Hillary Clinton, everybody on the Democrat side said the election had problems. I’m sorry, but it’s it’s a fair question.

Lake: I’m looking at what’s happening in Maricopa County, and you know what, let’s look at the 2022 election of August 2, where one hour into Election Day, because of my opponent Katie Hobbs’s incompetence, we ran out of ballots one hour into Election Day in one of our largest counties, Pinal County. We ran out of only Republican ballots, only Republican ballots.

Bash: That did happen, and County officials apologized.

Lake: But Dana, an apology doesn’t bring somebody’s vote back. All I’m saying is we need to restore honesty and integrity, and transparency to our elections. That is important. We’ve got to do it.

Bash: You’re right. It doesn’t bring votes back. But at least that is transparent. So, if leaders like you and President Trump are saying that the election was stolen, aren’t you participating, contributing, and even causing the idea of people thinking that the election is not safe and secure?

Lake: No, we are going to make sure our elections are safe and secure for Democrats, independents, and Republicans alike. We want to know that our legal vote counted. We want to know the winner on election night. We don’t want to be counting for 10 days, and we want everyone to know…

Lake: Dana, I’ve been on the campaign trail for 503 days. I’ve talked to moms and dads who are losing children because of fentanyl poisoning. I’ve talked to retirees who can’t afford gas and food. I’ve talked to parents whose children are getting out of high school and can’t read. We have serious problems. We have homeless people on our streets. And you want to have me on here, Dana, you want to have me on here and talk 2020 election, and you’re the one who accuses me of constantly talking about the election. Can we talk about the issues on the campaign trail? Can we talk about the issues facing Arizonans?

I came on here thinking we were going to talk about the issues facing Arizonans right now, and you’ve spent the entirety of this time talking about 2020. I think you’re stuck on 2020. I really do. I want to move forward and bring solutions.

I’m running against a twice-convicted racist to cost the state taxpayers $3 million because of her hatred for people of color. She paid a woman of color in her office $30,000 less than men doing the same job. Last week, we learned she held a slave auction a mock slave auction in high school. We saw her running from a black reporter, hiding in the bathroom from him. I’m not going to lose this election because the people of Arizona will never elect a racist like Katie Hobbs they just won’t.

Bash: I’m going to talk to Katie Hobbs right after you.

The post CNN Turns Kari Lake’s Mic Down As She Squares Off With Dana Bash On State Of The Union But Kari Recorded Her Own Audio – WATCH appeared first on The Gateway Pundit.