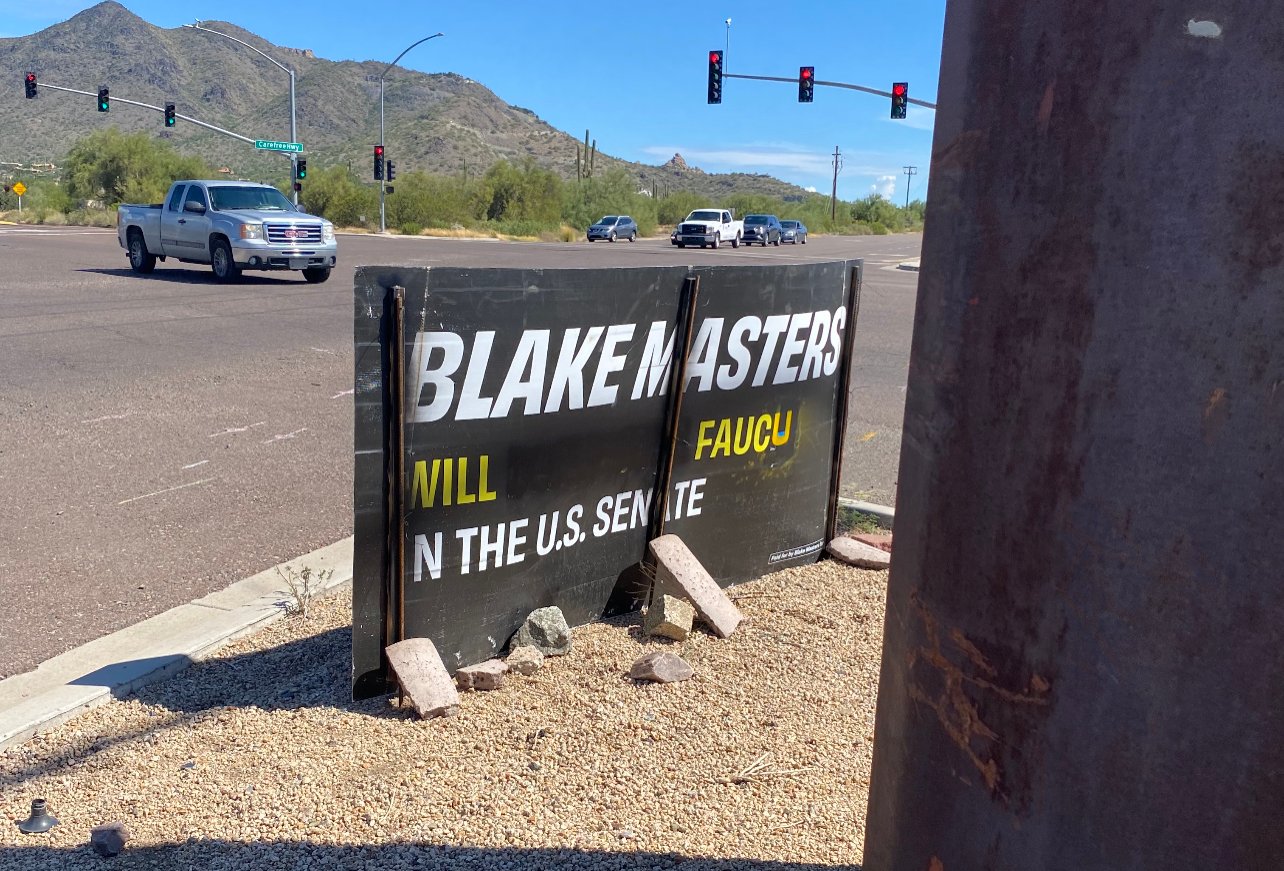 Patriots in Maricopa County, Arizona, successfully busted a sign thief using a tracking device after noticing that conservative political signs in the area were being vandalized, destroyed, or stolen at an alarming rate.

The stolen sign said, “No taxes! No override. No 310,” in opposition to a school budget override for Cave Creek Unified School District.

The concerned citizens were able to track the stolen sign to numerous locations, including a school in the Cave Creek Unified School District. They discovered that the sign ended up at a home near Carefree, Arizona.

Hundreds of signs have been stolen in the North Scottsdale, Carefree, and Cave Creek areas of Maricopa County this election cycle.

“We had been putting out these override signs for Cave Creek Unified School District, and the first batch was getting taken so fast, literally on the same day,” said a Patriot who goes by MAGA James.

James told us that he started putting signs with GPS chips out at 7 am one day, and one of them had been stolen within a few hours. “We couldn’t believe it because it was morning in broad daylight,” said James.

After tracking the sign to the perpetrator’s home, the Scottsdale Police were called. Police later recovered the sign and issued the woman a citation.

This is punishable by a class two misdemeanor, up to four months in jail, and a $750 fine.

The Gateway Pundit obtained a copy of the citation for the sign grabber for “tampering/removal of political signs.” This issue is not limited to budget override signs. This appears to be a coordinated Democratic effort to steal, vandalize, or destroy signs for Republican candidates in Arizona, according to residents of the area.

During the Arizona Primary Elections and now, Democrats have taken to destroying or stealing Kari Lake and Blake Masters signs. They are so terrified of Trump-Endorsed candidates putting America First that they’re willing to break the law.

I’ve pledged to replace EVERY sign that is destroyed with 3 More.

Another sign vandalized… that means 3 MORE are going up to replace it.

The New Right doesn’t back down.

Kari Lake called out those who are sick with “Trump Derangement Syndrome,” asking, “is President Trump’s face and mine  so triggering that they have to steal somebody else’s property?” She also declared, “every time you steal or destroy one of my signs, we’re going to print three more and place them throughout the state of Arizona.”

My message to these Losers: EVERY time you destroy one of our signs, we will put up THREE MORE in its place.

I can’t do this alone. Visit https://t.co/H8uQgxrhhs to help us plaster TRUMP & LAKE all over AZ! pic.twitter.com/zBDJoBhXTM I am a Precinct Committeeman (PC) from Arizona’s Legislative District 3 who has been active in U.S. Senate, State, County, and District political campaigns during the primaries and general election cycle. I was astounded by wholesale thefts, destruction, or defacement of Blake Masters and Kari Lake signs. The majority of the signs I placed were gone the next day or within a few days. I have photographed the destroyed signs. One large Blake master sign even had newly printed large lettering heavily glued onto the sign changing the meaning. “Blake Masters Will Fight Biden’s Inflation in the U.S. Senate” was covered up and became “Blake Masters Will Destroy Democracy in the U.S. Senate.”  The back of the sign was tampered with to read “Blake Masters will FUCQ-U in the U.S. Senate.” I filed a complaint with the MC Sheriff Dept, who was sympathetic but had little hope of catching anyone in the act.

I believe there is an organized group of Democrats or paid operatives stealing the signs in the middle of the night on behalf of Mark Kelly’s and Katie Hobbs’s campaigns.

Alternately, I think it could be the Arizona Democrats. I also believe it’s probable that Democrats driving by who have an implicit go-ahead to destroy any opposition are joining in on the fun.

If caught or prosecuted, this behavior is a misdemeanor punishable by up to four months of jail time and a fine of $750.00. The problem is getting the proof. Unless someone can photograph a face and a license number with the vehicle, there is little chance of catching the culprits. But culprits they are, and the signs are no longer in place.

Democrat Katie Hobbs has cheered these criminals on, sharing a photo of a Kari Lake sign that appears to have been destroyed. MAGA James believes, “Obviously, if you’re a Hobbs supporter, you’ll say ‘I’m going to kick this sign down and take a picture of it, and she’ll think I’m great.’”

This seems to only be happening to Republicans and signs in support of Republican causes.

Christian Lamar, a Republican Nominee for Arizona State House in District 2, recently shared security camera footage of somebody stealing a sign, saying, “our campaign signs are being vandalized/stolen every day.”

To our Supernatural supporters/voters/donors: our campaign signs are being vandalized/stolen everyday. We would like u to have a 4 ft x 4 ft campaign sign for your lawn or property. Please send us an email (campaign@christianforarizona.com) for delivery. https://t.co/B97TarfoNS pic.twitter.com/8YCNw1uPH6

MAGA James told us, “this is anti-American. It’s suppression of the First Amendment, our most cherished amendment, and it’s quite frankly disgusting. People that vandalize and steal signs should be ashamed of themselves.”

Since the citation was issued, “most of the sign grabbing has slowed,” James said. “It seems to have made a dent in the stealing of signs. That’s really what we’re going for.”

Within hours of setting the first signs, one was stolen. It was taken to a school in the Cave Creek Unified School District. Which incidentally is what this “no override” sign refers to. It was then tracked to multiple locations. It finally ended in an affluent community in North Scottsdale.

At that point, the North Scottsdale PD were contacted. They were courteous, they were responsive, and they were effective. They went to the perpetrator’s house, recovered the stolen property, and issued a citation. This carries with it a class two misdemeanor, up to four months in jail, and a $750 fine.