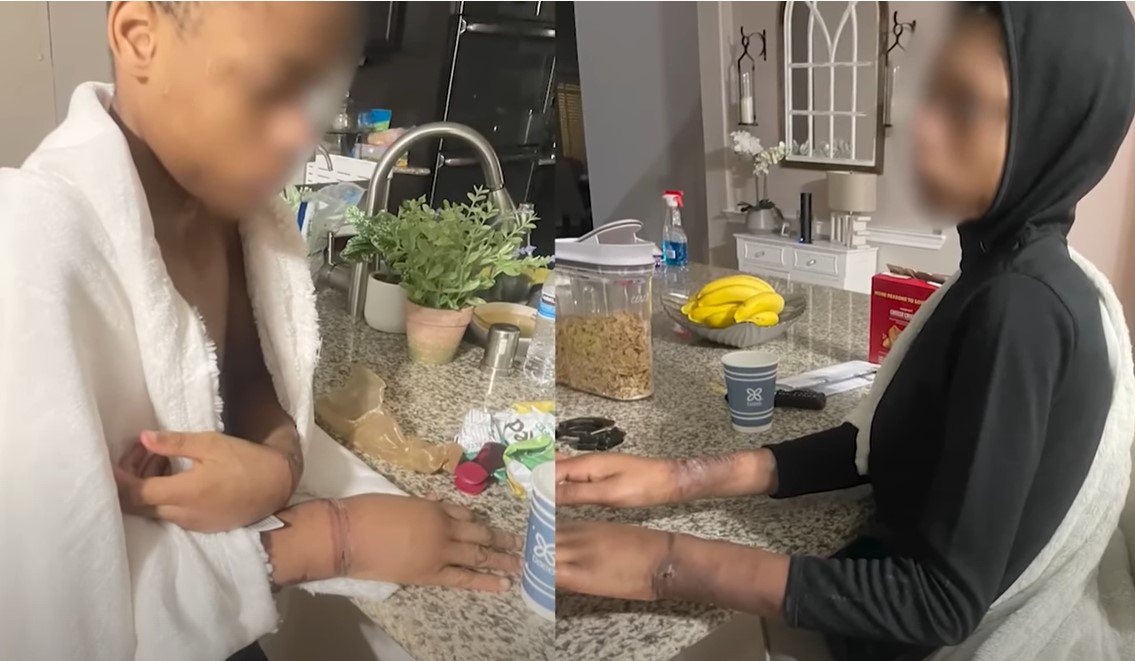 The twins had swollen and scarred wrists from months or years of abuse. The twins went door-to-door asking for help after their escape. One single mother finally let them in and called police.

Two 16-year-old twins escaped a house of horrors in Houston this week. The twins were kept starved, naked and shackled in the basement. They were were forced to drink urine and were surrounded by feces.

A Houston mother and her boyfriend were captured in Louisiana after they fled the state. The mother who did not feed her children is wearing braces on her teeth when she was arrested. Here is the video report from KHOU.

The handcuffed teens whose escape from a Cypress home led to the arrests of their mother and her boyfriend suffered horrific abuse, according to a source.

The 16-year-old twins ran door to door through the neighborhood for half an hour early Tuesday pleading for help.

The boy was shirtless, both were barefoot and shivering when a kind woman in a nearby subdivision answered her door and let them inside.

“They were so skinny and so frail. They just looked like they had been through a lot,” the woman said. “They told me that their mom kept them locked in the laundry room, naked, zip tied from the ankles and handcuffed from the wrist.”

The woman fed them, wrapped them in blankets and called the Precinct 5 Constable’s Office.

The twins told investigators they weren’t allowed to use the toilet and were forced to drink their own urine and live surrounded by feces in the laundry room. Both were malnourished and the boy had at least one fractured bone that had healed, a source said. They also had bruises, cuts and scars all over their bodies and were extremely thin with their bones sticking out.

“They would only feed them a sandwich, only if they were quiet the whole day, if they made any type of noise they wouldn’t be fed,” the woman said. “How a mother could do this to her kids and… I feel like my tears are out of frustration anger and sadness.”

Deputies went to the house to investigate but the couple and five other children, ages 8 to 14, were gone so an AMBER Alert was issued.

Hours later, Zaikiya Duncan, 40, and Jova Terrell, 27, were arrested in Baton Rouge, La. Both could be charged with injury to a child and will be brought back to Houston on Thursday.

Only one child was with the couple when they were arrested. The other four boys were later found safe with relatives in Louisiana.

The post 16-Year-Old Twins Escape House of Horrors – Mother and Her Boyfriend Kept Them Starved, Naked and Shackled, Forced to Drink Urine (VIDEO) appeared first on The Gateway Pundit.