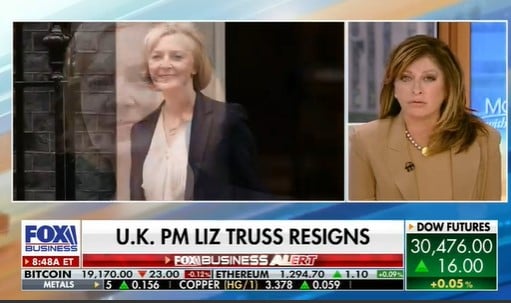 UK Prime Minister Liz Truss resigned on Thursday after just six weeks in office following her tumultuous start as the country’s economy is in crisis.

A British newspaper has started a live stream on YouTube of Liz Truss’s photo next to a lettuce to see which one lasts longer. I do love this country’s sense of humo(u)r. pic.twitter.com/nVpbozX3OP

Her departure comes after a series of u-turns following former Chancellor Kwasi Kwarteng’s disastrous mini-budget which eventually saw him replaced by Jeremy Hunt.

Beginning what was to be a tense evening for the Conservative Party, outgoing Home Secretary Suella Braverman criticised PM Liz Truss in a blistering resignation letter as she left her post on Wednesday, to be replaced by Grant Shapps.

There will now be a fresh Conservative leadership election lasting just a week.

Here is video of the Prime Minister’s announcement.