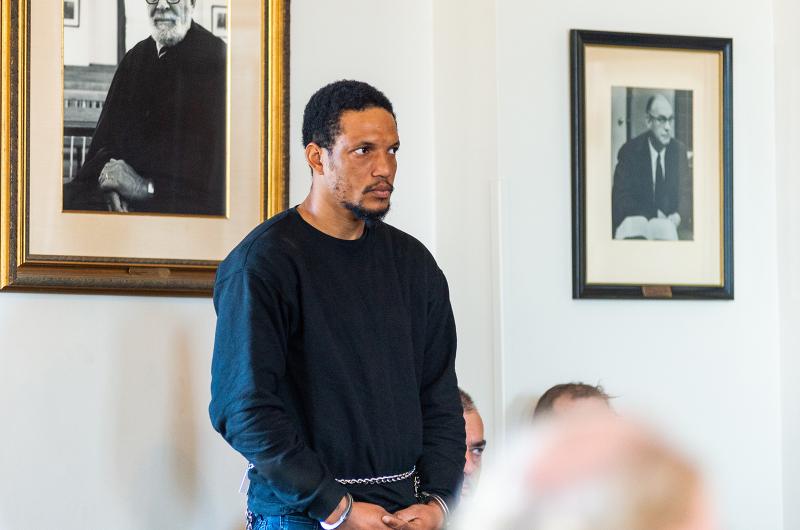 The getaway driver, Miquel Jones, 30, was arrested on Friday and arraigned this week.

Jones is a Jamaican citizen so he is being held on $300,000 bail with GPS monitoring and a curfew on condition of release.

According to the Vineyard Gazette, three masked men armed with semi-automatic handguns ambushed the bank employees last Thursday morning as they were opening for the day.

The employees were bound with duct tape while the robbers stole cash.

It is unclear how much money was stolen from the bank.

The defendant’s lawyer argued her client was not a danger to the community because he had been a landscaper in the area since 2016 and played on the Jamaican national soccer team.

“This is not somebody who would, in any way, shape or form, be a danger to community. And at the time, there are no allegations that he did anything except possibly help some people after the fact. There’s no allegations that he was present at Rockland trust on the morning of Nov. 17.” – Jones’ defense lawyer Casey Dobel said in court on Monday, according to the Vineyard Gazette.

The three masked robbers are still at large.

On Monday, Cape and Islands assistant district attorney Michael Giardino provided further detail on the theft and subsequent investigation, describing the sequence of events that led to Monday’s arraignment.

Mr. Giardino said that almost immediately after the stolen vehicle was abandoned near the state forest, a dark blue Hyundai Elantra with a missing driver’s side read tire hubcap left the parking lot.

“Through investigative measures, which included speaking to witnesses and observing surveillance video from multiple sources, it was determined that the 2007 Hyundai Elantra was likely involved in the robbery,” Mr. Giardino said in court Monday.

Police later stopped a vehicle that fit the description on Friday, Nov. 18, Mr. Giardino said. Mr. Jones was driving the car and agreed to speak with police, prosecutors said. Mr. Jones admitted to being in possession of the Hyundai for “five weeks” and in the parking lot where the stolen vehicle was abandoned at about 8:20 a.m., prosecutors said.

Police also said they observed other clues that led to Mr. Jones’s arrest in connection with the robbery.

“Jones was evasive throughout the course of questioning,” Mr. Giardino said. “While speaking to Jones, investigators observed a green, vegetation-like substance, which appeared similar to material located in the abandoned employee/victim’s vehicle, on his shoes.”

During a search warrant of the Hyundai, investigators also found three one-hundred dollar bills, two of which displayed sequential serial numbers, prosecutors said, as well as a pair of white Nike sneakers and dark clothing, consistent with what witnesses and surveillance video showed the robbers had worn, Mr. Giardino said.

Mr. Giardino said Mr. Jones was a Jamaican citizen and that his time in the country was set to end in March. He said that there could be further charges for Mr. Jones in the case, and that the police investigation for other suspects remained ongoing.

“Police are making efforts to continue to identify and locate the other people involved as perpetrators,” Mr. Giardino said.