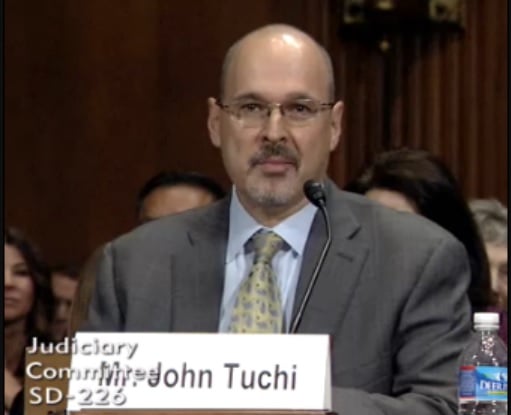 Obama Judge John Tuchi in Arizona ruled on Wednesday afternoon, November 23, 2022, the day before Thanksgiving, that Maricopa County was justified in discriminating against TGP reporter Jordan Conradson and preventing him access to the County’s press room after another corrupt election disaster in the county.

Judge Tuchi who was appointed by Barack Obama to the District Court in Arizona waited until Wednesday afternoon, the day before Thanksgiving, to announce his ruling on the case between The Gateway Pundit and Maricopa County in Arizona.

The manner in which the ruling was laid out indicated that the judge may have had his ruling before hearing any of the arguments in court last Thursday and he just inserted some final comments into a template for this ruling.

Knowing that the judge was an “Obama Judge” gave little hope that the judge would rule for the TGP in this case anyway.  What really needs to be investigated is how Obama judges always seem to end up overseeing cases involving conservatives and then ruling against them.  In cases like this one, you can always bet that the Obama judge will rule for the more liberal position and party. Always.

As reported previously, the crux of the case involved the constitutional rights of TGP reporter Conradson.  Conradson was not permitted to join the press briefing in the county along with another reporter, Ben Bergquam with the Bannon War Room.  They were physically removed from a recent presser by the county.  Conradson was refused entry recently at other events in the county as well.

The individuals at the county are likely angry with Conradson after he reported on a fellow Maricopa County Supervisor who resigned after audio of him was released by Conradson in an article at The Gateway Pundit.

The Gateway Pundit gets to the truth and this bothers them.

BREAKING: Maricopa County Supervisor Steve Chucri RESIGNS From Office After TGP Exposé : “There Was No Cover-Up, The Election Was Not Stolen. Biden Won.”

In his Order denying Gateway Pundit and Conradson access to the press room, Judge John J. Tuchi found that Maricopa County has a legitimate government interest in having carte blanche discretion to grant or deny media press passes strictly based on its own evaluation of the integrity of the media outlet.

In other words, if a star chamber in Maricopa County thinks your media outlet is unworthy, no press pass for you.

TGP also argued that Maricopa County deliberately discriminated against Gateway Pundit and Conradson as evidenced in no small part by County Recorder Stephen Richer’s OBVIOUS HATRED for TGP in a recent re-tweet: Obama Judge John J. Tuchi found that while “[s]uch behavior may be beneath the dignity of [Richer’s] office,” Gateway Pundit nevertheless failed to “substantiate their claim that keeping them out [of press conferences] was the animating reason behind the restrictions.”

At the same time, Judge Tuchi accepted all the County’s arguments slandering The Gateway Pundit as a publication that doesn’t cite articles or sources in its articles which is total nonsense as we proved repeatedly during the court proceeding.

(TGP’s Vice President Joe Hoft traveled to Arizona to testify.  When testifying, Joe Hoft discussed the size of The Gateway Pundit and its success story, he said he glanced at Judge Tuchi at that time and felt like he was seeing the same look that Barack Obama gave Netanyahu.)

Gateway Pundit and Conradson are planning to appeal and demand their First Amendment rights be restored.

Below is Judge Tuchi’s decision.

This case is bigger than The Gateway Pundit. It is essential that Americans have the right to access public hearings and public meetings no matter what Obama judges might rule.