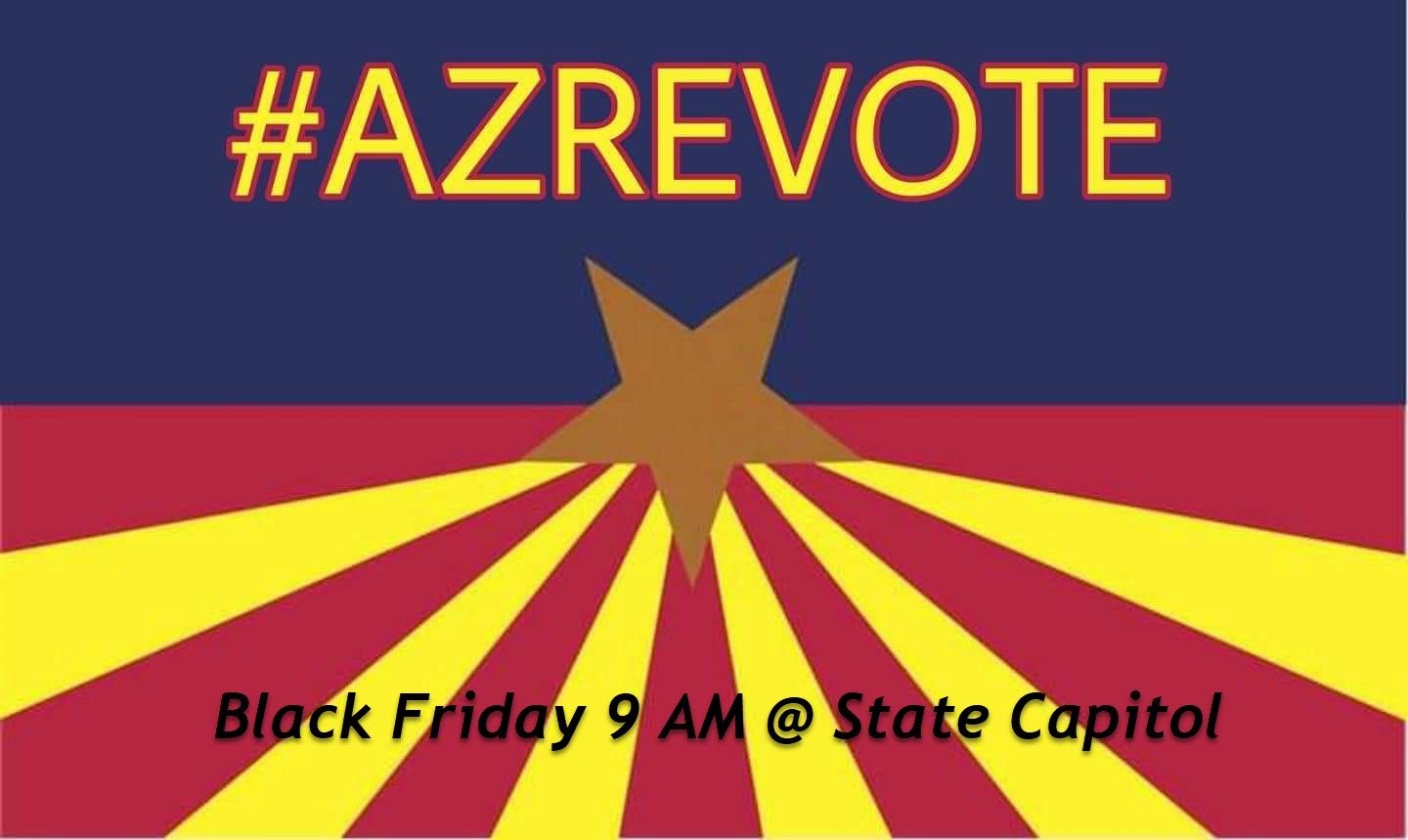 Patriots in Arizona demanding a redo of the 2022 general election have organized a protest near the Arizona Capitol TODAY at 9AM and through the weekend before counties canvass the results.

The protest will include a peaceful gathering and opportunities to hold signs and banners on highways across the state.

The Arizona election was an uncertifiable mess due to voters having their ballots stolen, not counted, or being prevented from voting altogether.

The Gateway Pundit reported on the serious issues in Maricopa County’s General Election on November 8. Due to the incompetence of Maricopa County and Katie Hobbs, tabulators were down, printers ran out of ink, and long, long lines kept Republican voters waiting to cast their ballots. Republican voters were told to drop their ballots into a separate container called box 3 to be counted later. Election experts and election workers later reported that these uncounted ballots were mixed with already counted ballots, leaving no way of knowing if all legal votes were counted!

If a voter had already checked into a polling location to vote but needed to leave due to long wait times, they were not allowed to vote at another location.

Despite this issue occurring at over 30% of polling locations on election day, Maricopa County officials would have us believe that only 17,000 ballots were affected and dropped into Box 3.

The Gateway Pundit recently reported that a group of citizens in Arizona released a statement calling for a new election to be held on December 6.

A Case for Redoing the 2020 Election Now

Patriots and candidates are not going to accept this corrupt election.

Trump-Endorsed Kari Lake, who had her victory stolen on election day, recently said, “I will become Governor.”

Former State Senate candidate Jan Dubauskas also joined calls for the Maricopa County Board of Supervisors to hold a re-vote this morning.

Maricopa County is the epicenter of election integrity.

We cannot continue to question our elections. The BOS must hold a re-vote!

A redo election, also known as a revote or special election remedy, is the process of voiding election results and holding a new election.[1] The specific reasons for calling a redo election vary, but might include deliberate efforts to obscure the results such as electoral fraud or mistakes like a broken voting machine.

Grassroots activists organized the protest on Friday to take back Arizona’s corrupt elections. Bad actors who seek to cause harm to this movement will be shunned, and law enforcement will be encouraged to arrest them immediately.

Organizers told The Gateway Pundit that they want this to be similar to the Brazil protests, where millions took to the streets to peacefully fight back against stolen elections.

Food trucks, vendors, and more are expected to attend this massive gathering.

Attendees will be encouraged to call out bad actors and remain peaceful.

Prayer and Protest events are planned for Friday and Saturday Nov 25th & 26th beginning at noon. Please show up with signs/banners as described below to the locations listed below. Your help is needed! And, please spread the word via social media, emails, phone calls, etc. Remember, this post can be shared to Facebook and Twitter via the buttons at the bottom. You can copy/paste for emails.

This is now growing and we will have two primary pushes – The Drive awarness on overpasses and the Friday Protest at the capitol.

Specific for this initial push of #AZRevote campaign:

Meet at the capitol at 9 AM BLACK FRIDAY and let your voice be heard peacefully, prayerfully! We have many big names coming to speak We will put up here once confirmed today. Who we do have confirmed are Joe Oltmann & Friends, David Clemens, Pablo Martinez, Liz Harris, James Knox, Michelle Dillard, Shiry Sapir, Gail Golec and many more!

Patriots from around the country are encouraged to help Arizona peacefully and patriotically protest against fraudulent elections.

The post PROTEST TODAY IN MARICOPA: #AZREVOTE – Patriots Plan HUGE Protest in Front of AZ Capitol Today at 9AM appeared first on The Gateway Pundit.